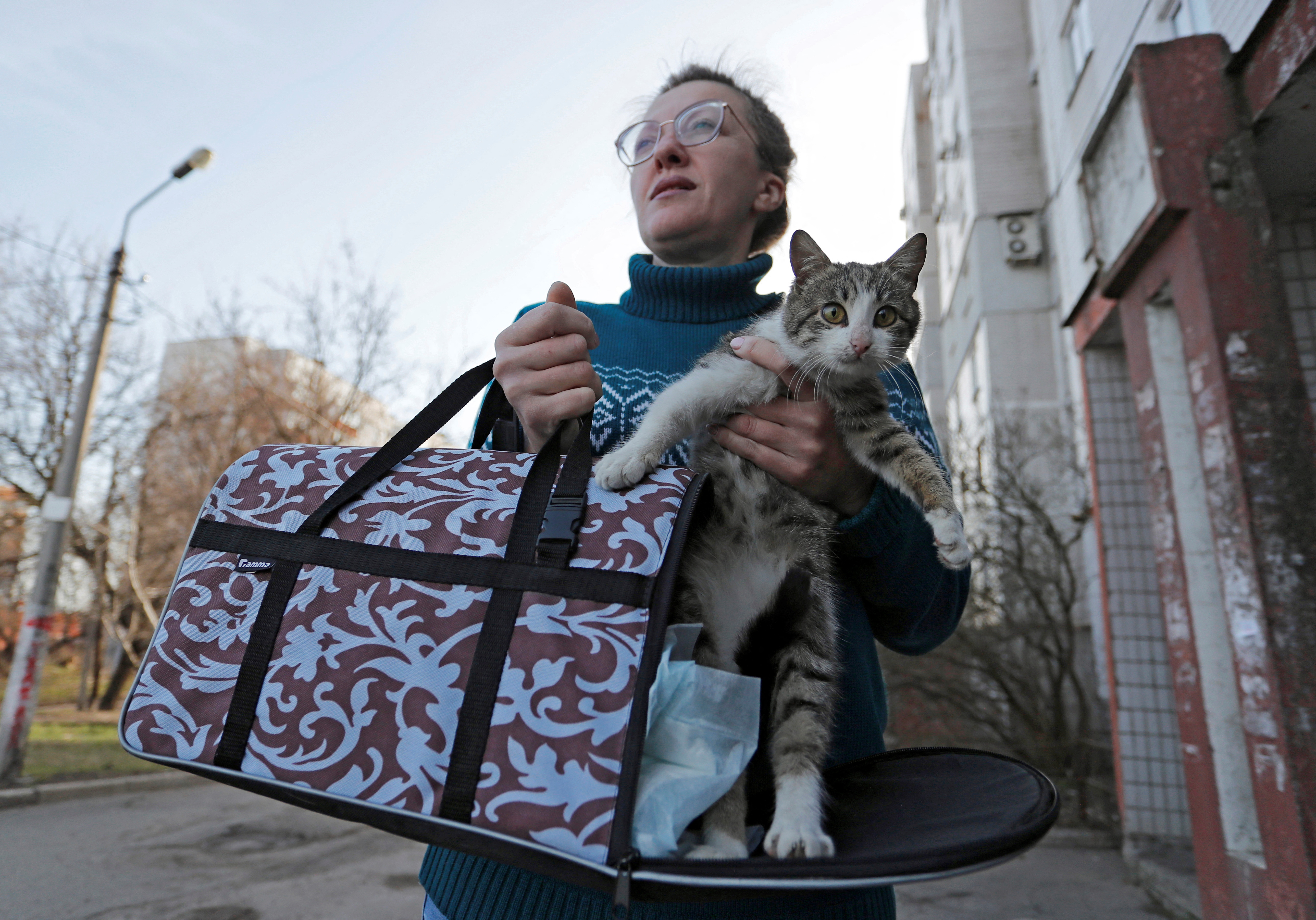 A one-eyed female cat, found in a destroyed house in the Ukrainian town of Volnovakha and evacuated by volunteers to Russia amid Ukraine-Russia conflict, sits in the arms of Svetlana, who adopted her, in Moscow, Russia April 9, 2022. REUTERS/Evgenia Novozhenina

April 12 (Reuters) - With the trunk of her car filled to the brim with pet carriers, Yulia drives across the conflict-torn Donetsk region of eastern Ukraine to pick up cats and dogs abandoned by owners who fled in the hope of finding them new homes in Russia.

The self-proclaimed Donetsk People's Republic, a Russian-backed separatist region, announced the evacuation of its residents to southeast Russia due to increased shelling days before Moscow sent troops into Ukraine on Feb. 24 in what it called a "special military operation".

As residents rushed to flee, many pets were left to their own devices.

Yulia from Donetsk, has already made nine trips to the Russian border, carrying up to 18 pets each time. There she hands abandoned cats and dogs over to Russian volunteers who then drive them to Moscow some 900 kilometres (560 miles) to the north.

Volunteers headed by Irina Marchenko, a pet store owner in Moscow, have come together from both sides of the border to bring the abandoned cats and dogs of Donetsk to new homes in Russia.

Yulia said she felt compelled to help, even if that meant driving for hours through checkpoints with misbehaving cats and squealing puppies as passengers in her dark green Lada.

"Volunteers are caring for so many pets right now," said Yulia as she stroked a tabby cat. "In Donetsk we don't know where we can find them homes because tons of people are leaving."

Russia has recognised the breakaway territories in Donetsk and Luhansk as independent states, though the rest of the world considers them part of Ukraine. Russian-backed separatists in those two regions have been fighting Ukrainian forces since 2014.

Marchenko, the mastermind of the rescue operation, first connected with Donetsk residents over social media, offering them to temporarily house their cats and dogs or find them new homes in the Russian capital.

"When I woke up on Feb. 24, I understood that a lot of animals would end up on the street, that people would not be able to bring them along," the 36-year-old Muscovite said.

"We wanted to first of all save the animals that were abandoned, those that have never been on the streets and wouldn't survive there."