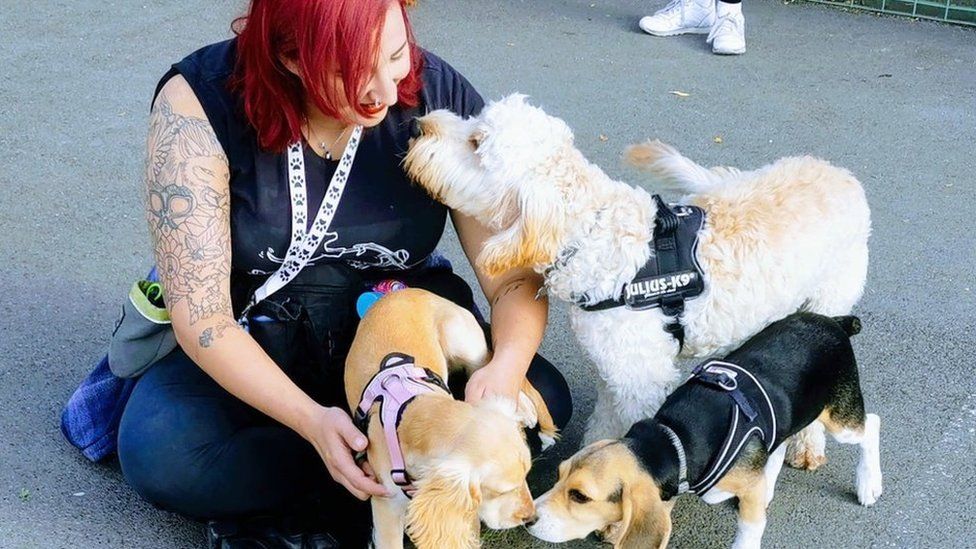 By Dhruti Shah and Will Smale Business reporters

Dog trainer Olivia Leathley has struggled to keep up with the demand for her services over the past six months.

"I was working seven days a week at one point, which wasn't conducive to my mental health," says Ms Leathley, who is based in Greater Manchester.

"I'm now starting to spread my bookings out more, and make sure that I take two days off a week."

Ms Leathley says there are two main reasons why she has been so busy. Firstly, the large number of people who got a puppy or other new dog during the lockdowns.

And secondly, the inability of these four-legged friends - and of some long-established family pooches - to cope when their owners had to start going back to the office for the first time since March 2020.

"So many dogs have got used to having their owners at home all the time that they cannot handle it when they go back to work," she says. "It is separation anxiety.

"A good 50% of the dogs I work with are new puppies that people bought during the pandemic, but the other half are long-established members of people's families." 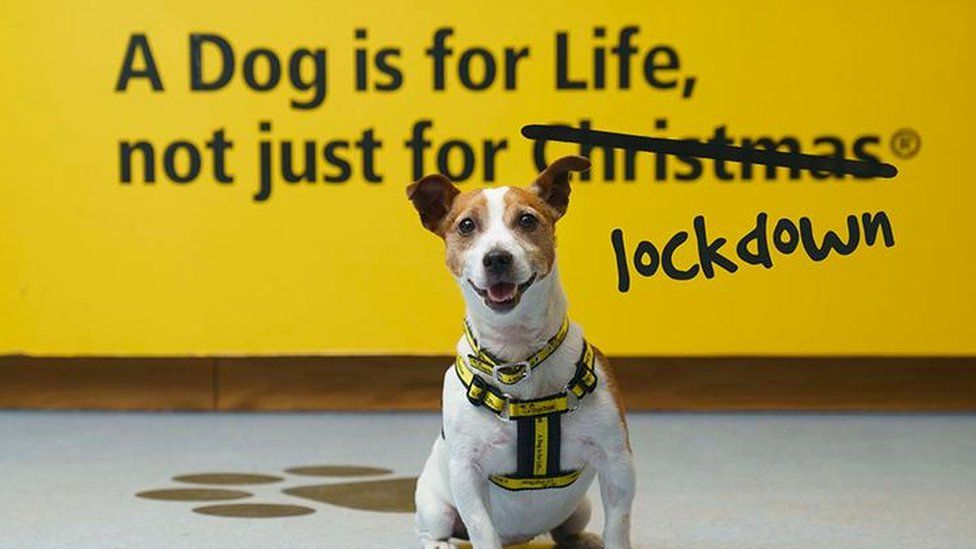 Ms Leathley, who trades under the name Biker Girl Dog Trainer, was previously a dog walker, but she switched to training in mid-2020 after getting a qualification and seeing a surge in demand.

"I had so many clients come to me with dogs with behavioural issues that it wasn't feasible to continue with my walking clients," she adds. "But the demand for dog walkers has also shot up as people have to return to work, so I subcontract that work out to three other women."

With people working from home during the pandemic, professional dog walkers, sitters and trainers initially didn't see any of these new dogs, nor most of their regular customers.

"When Covid hit in March 2020 the business just died," says Richard Hollings, owner of dog walking and day-care business We Will Walk U.

"A number of other dog walkers that I know lost their jobs, as people didn't need their help, but we managed to hang onto a couple of key customers." 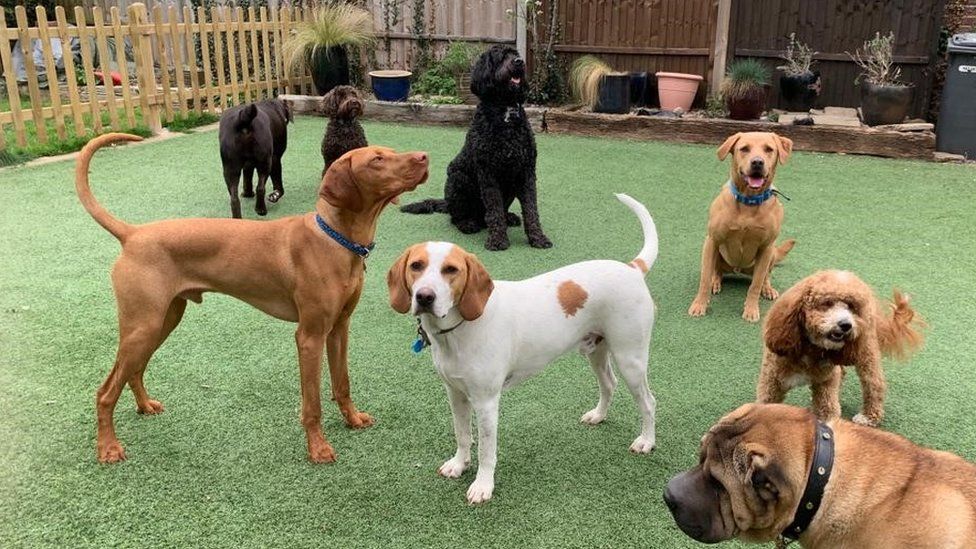 Image source, We Will Walk U

Dogs at We Will Walk U, which saw business rise strongly from the start of last year

Mr Hollings, who is based in the Berkshire town of Maidenhead, says things were then transformed from the start of last year.

"We suddenly saw a huge influx of new customers, and especially a huge number of first-time dog owners. People were having to go back into work for the first time after getting a dog or trying to book holidays for the first time since 2019.

"And business hasn't slowed since then. We have had a monster amount of work over the past 15 months, and we are now fully booked all the way through to September. So phenomenally busy."

In Oakland, California, dog walker Merika Reagan says that her customers started to return during the lockdowns.

"Some people did come back because they realised that even though they were working from home, they couldn't give the dog their full attention," says the owner of City Hikes Dog Walking and Pet Sitting. 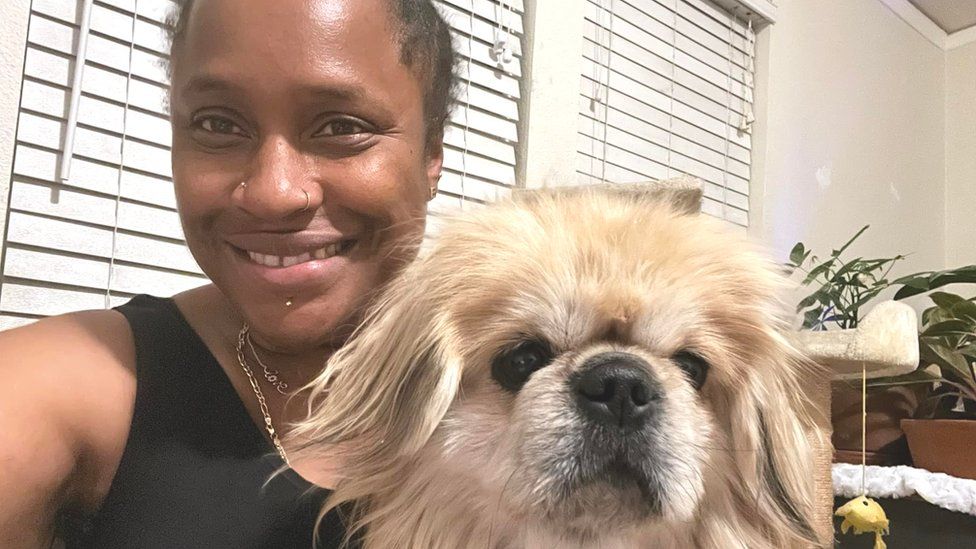 Merika Reagan says customers came back during the lockdowns

"Their dogs were wondering 'why aren't they playing or going out with me?'. If the owner is on Zoom, the dog might be scratching or barking at the door, and so they came back for that reason."

She adds that more dog owners are now getting in touch as they start having to work in the office again, and because others are booking holidays again.

Yet it will take a while for City Hikes to return to pre-Covid levels. "Before the pandemic it was me and eight employees, and now it is me and three."

Aaron Easterly is the chief executive of Rover, a website and app that connects dog owners to walkers and sitters. It operates in 10 countries, and claims to have around two-million customers.

He says that customer numbers returned to pre-Covid levels by May 2021. However, he adds that uncertainty about whether flexible working is here to stay makes it difficult to make future growth projections.

"Of course, we don't know how hybrid office policies are going to play out and what else the pandemic has in store for us, and so it's unclear exactly what the acceleration in demand will look like," says Mr Easterly. 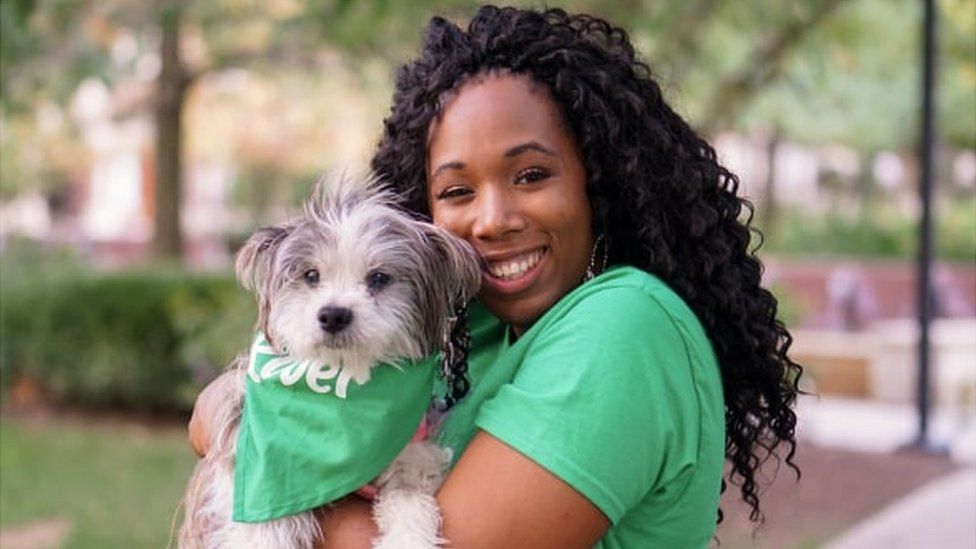 "And like many other organisations we don't recommend leaving dogs alone for more than four hours at a time, and for some dogs, even this will be too long," she says. "Using a reputable dog walker or sitter is a great way of provisioning dogs with the company they need, and opportunities to exercise, play and go to the toilet."

Back in Greater Manchester, Olivia Leathley also sheds light on another little-spoken about issue that is impacting lockdown pets.

She says she is now seeing dogs that cannot be left alone for any amount of time after growing accustomed to being around their owners 24/7.

"Even though people had previously been able to leave their dog for a few hours, now it cannot go 30 seconds on its own!"