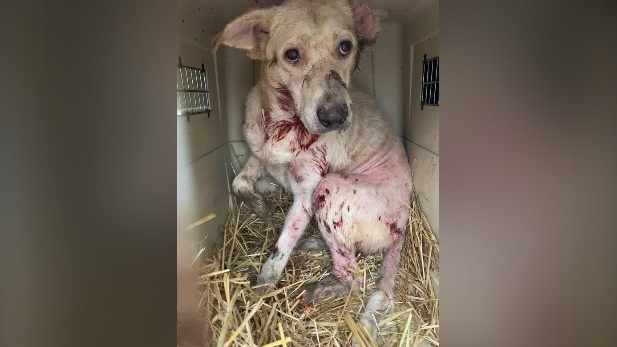 Forty-seven dogs, three cats and a turtle were rescued from a single home near Brantford.

The animals were discovered inside a residence in Burford on Oct. 2, after a man living in the home was taken to hospital following an ambulance assistance call and later pronounced dead.

“The death was really not related to the dogs at all. It’s not suspicious. There are no public safety concerns,” said County of Brant OPP Constable Conrad Vitalis.

Police say no charges will be laid and the investigation is complete. Hillside Kennels Animal Control was contacted to assist with the animals.

“Without going into gory detail, none of the dogs had gone outside in at least three years,” said Cassia Bryden with Hillside Kennels Animal Control.

Bryden is also the founder of Sato Saved End of the Line Dog Rescue and Rehabilitation. She said a lot of the animals were traumatized, starving and sick.

“Fight wounds from varying weeks and degrees of healing. Some of the dogs have skin like leather,” Bryden said.

Two of the dogs, Tara and Nelson, were among the animals found in the home. Bryden said they are calmer than some of their siblings, who still need some time to adjust to being around people and in a new setting.

“Those ones will not even walk proper yet. They crawl because they’re so scared,” said Bryden.

Bryden has been rescuing animals for 15 years but said she’s never dealt with a case like this. She said she loves to help and it's worth it when she sees tails wagging and hope in the animals’ eyes.

“You can tell they really want to love. They’re just a little bit standoffish,” said Bryden.

Hillside Kennels says it’s getting plenty of help from the community.

“Leashes, a couple of beds came in today. Everybody has been absolutely amazing on top of all the monetary donations that have come in,” said Tracey Gibson, Co-Owner, Hillside Kennels Animal Control.

Hillside Kennels staff said they could only fit less than a dozen dogs at their facility. The rest of the dogs are at other rescues and foster homes across the province.

Bryden started a fundraiser to help the animals. Anyone looking to donate can visit her GoFundMe page.