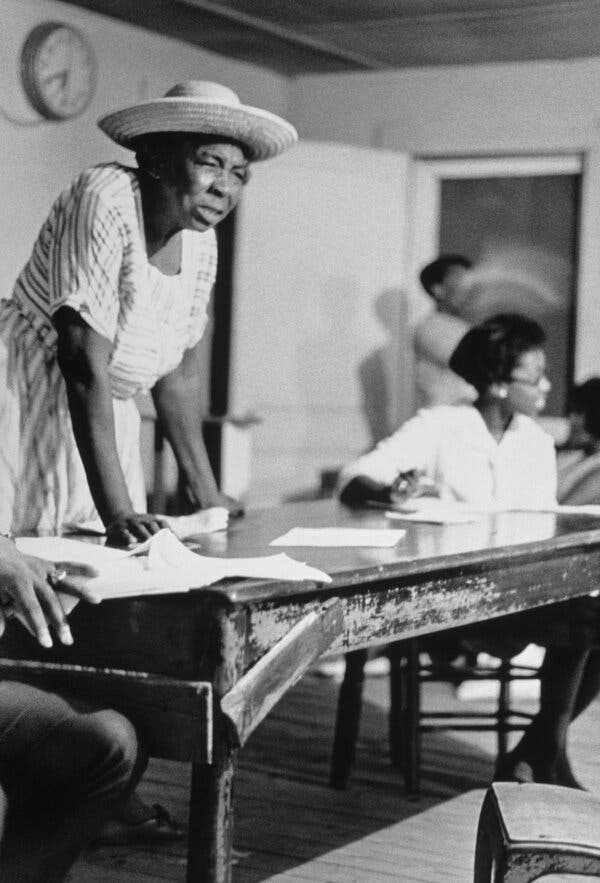 Doris Derby, an educator, artist, activist and civil rights era photographer who turned her camera away from the violence of the times to capture the quieter moments of the movement, and in so doing documented the transformation of Black life in rural Mississippi, died on March 28 in Atlanta. She was 82.

Her death, at a hospice facility, resulted from complications of cancer, said Charmaine Minnifield, an Atlanta-based artist and friend.

It was the searing images of children blasted by fire hoses, of peaceful protesters set upon by snarling dogs and policemen, batons aloft, that drew the Bronx-born Dr. Derby — newly graduated from Hunter College in Manhattan after studying cultural anthropology — to Jackson, Miss., in the fall of 1963. When she began to take photos, however, her subject matter was different.

“I had a quest to show what the average person was doing,” she told the Southern Oral History Program in 2011, part of a collaboration with the Smithsonian National Museum of African American History Culture. “I had a quest to show our culture in total, not just a little bit, or negative stereotypes.”

It took some time before she picked up a camera, however. Over five years she was an indefatigable foot soldier of the civil rights movement, working first as a field secretary for the Student Nonviolent Coordinating Committee to develop an adult literacy program.

Dr. Derby went on to co-found a repertory theater, research the educational outcomes of Black and white students, seed and oversee Head Start programs and lead the development of cooperatives to make leather goods, Black rag dolls, baskets and other local products.

As the marketer for Liberty House, the retail outlet for those wares, she took the products on the road, traveling all over the country (she even had a booth at Woodstock). In 1968, she joined a Jackson-based initiative called Southern Media, which had a mission to document Black life and train local Black residents in photography and provide equipment and a darkroom to do so, and she began taking photos of those positive endeavors. 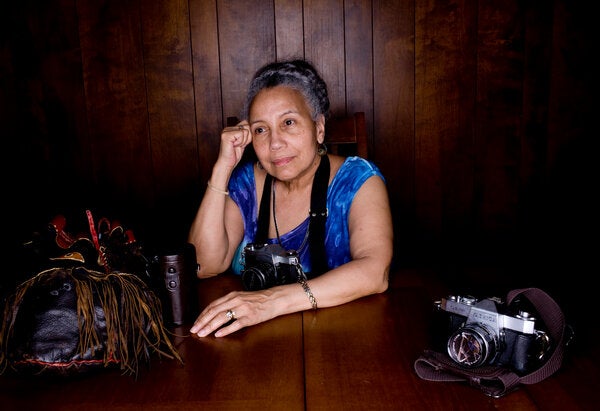 Dr. Doris Derby in 2008. In hundreds of images in the civil rights era, she captured Black people engaged in the kind of civic life that had long been denied them in the American South. Credit... David Walter Banks for The New York Times

She photographed toddlers being examined at health care clinics, and the young doctors and nurses who were attending to them; she showed older women sewing at quilting cooperatives, or gathered at co-op committee meetings; she snapped voters of all ages casting their ballots at a local polling place; and she captured a scene in a math class that was part of an adult education program. She photographed Black-owned businesses and Black elected officials and the rapt faces of audiences at political rallies in Black churches.

In hundreds of images, Dr. Derby captured Black people engaged in the kind of civic life that had long been denied them in the American South. And her photos presented a detailed history of the civil rights movement’s grass-roots efforts to empower Black people in all areas — economically, politically, socially and physically. 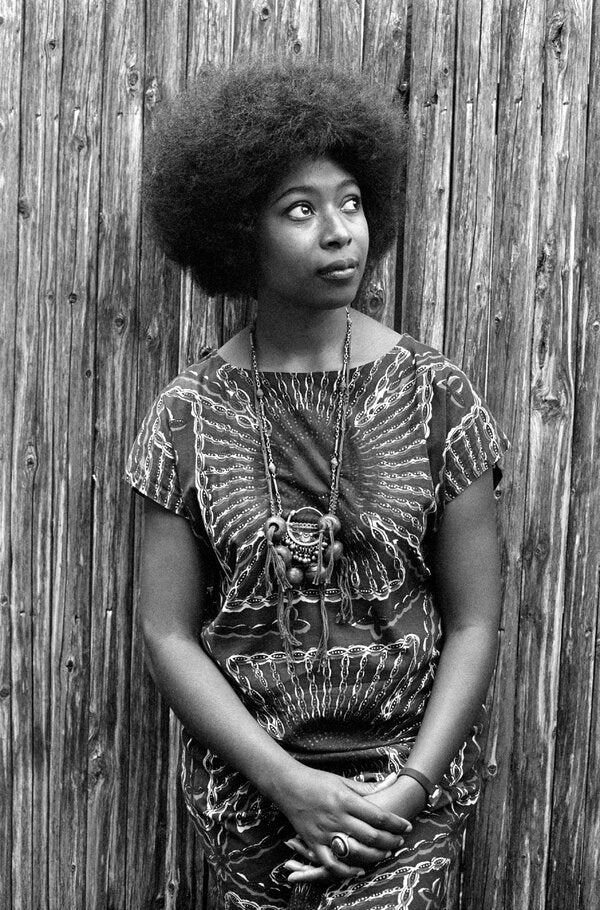 The novelist Alice Walker in Jackson in an undated photo. Credit... Doris Derby 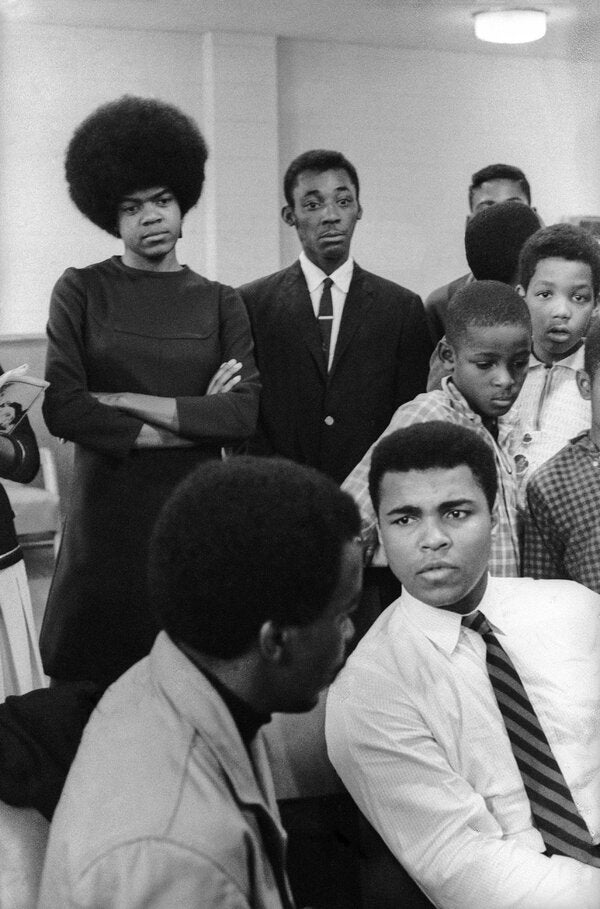 “Doris saw the social fabric that was largely ignored by the mainstream media,” said Julian Cox, who included her work in his 2008 show, “Road to Freedom: Photographs of the Civil Rights Movement 1956-1968,” at the High Museum of Art in Atlanta, where he was then curator of photography. “These weren’t images that were created to draw attention in the media, those flash point moments that S.N.C.C. and other organizations used as a catalyst for fund-raising. Her work was differently focused, and that’s why it stood out.”

Dr. Derby was one of the few women behind the camera — much of the movement was chronicled by white male photographers, working for mainstream media companies — and she often trained her eye on women and children, which gave her work a special potency.

“By photographing women and children, she restored a sense of normalcy to the drama of the moment,” said Deb Willis, a professor of photography at New York University and the director of the school’s Center for Black Visual Culture/Institute for African American Affairs. “By documenting the quiet life of families, she offered a counterpoint to the impact of terror on those families.” Professor Willis added, “She showed images of the people who were affected by the inadequacies of that time — the inability to vote, to be educated, to have health care.”

Mississippi was completely segregated when Dr. Derby and other young civil rights workers arrived in the early 1960s — she was just 24 — and their work was extremely dangerous. Rifles were kept at the Head Start centers, frequent targets of white vigilantes. In her monograph, “A Civil Rights Journey,” (2021), she recalled being housed by a family who had donated land for an education project, and who were threatened so often that the father and sons kept watch with guns each night. She described driving past a church that housed a Head Start program and seeing a flame flickering at the end of a fuse heading toward it. She and her colleagues jumped of their car, stamped it out and continued on. 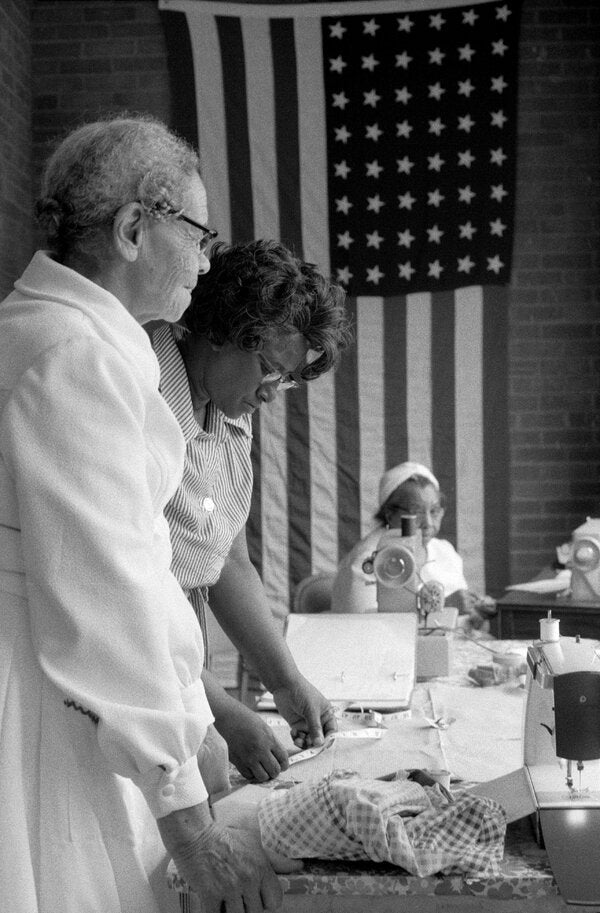 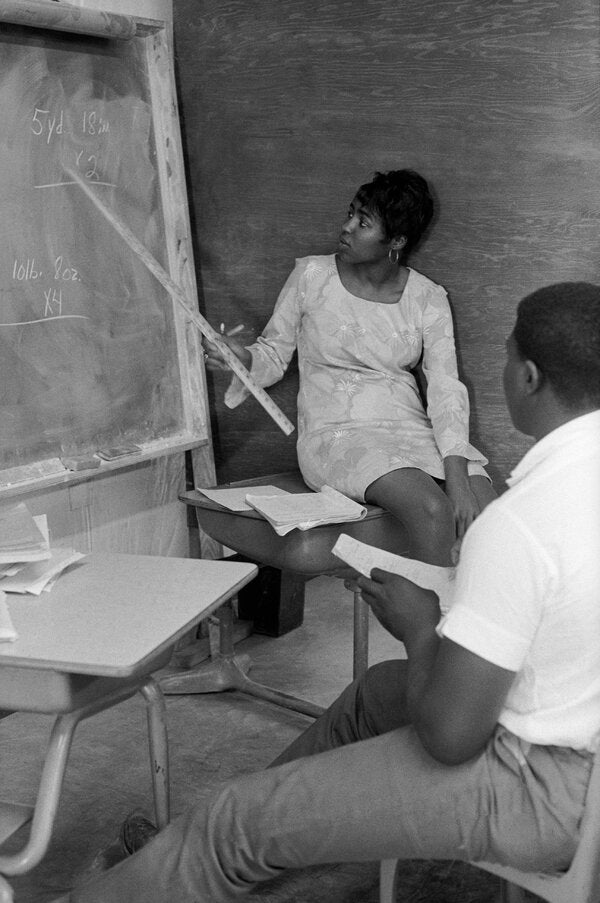 A mathematics class, part of an adult education program at the Tufts-Delta Health Clinic in Mound Bayou, Miss., in 1968. Credit... Doris Derby

“We were too young to be terribly frightened,” said Joyce Ladner, a sociologist, policy analyst and S.N.C.C. alum who first met Dr. Derby when they were working on voter registration drives in Jackson. Dr. Derby was developing literacy programs to help would-be voters at a time when the obstacles to registration included impossible test questions like how many grains of sand were in a quart jar or how many bubbles in a bar of soap. Dr. Ladner, a former president of Howard University, was then a student at the historically Black Tougaloo College, where integrated groups could gather safely. “We were fighting for something,” she said. “We weren’t defeated by the problems around us.”

Dr. Derby was raised to social activism: A grandparent had started a chapter of the N.A.A.C.P. in Bangor, Maine, and her father had founded an organization to promote the careers of Black civil servants. She was also an artist interested in her African heritage — she painted, she danced — and she planned to pursue a career in cultural anthropology, researching African imagery around the world. One summer during college, she traveled to Nigeria.

But the movement got in the way of her plans. She ended up spending nine years in Mississippi before returning to academia in 1972. 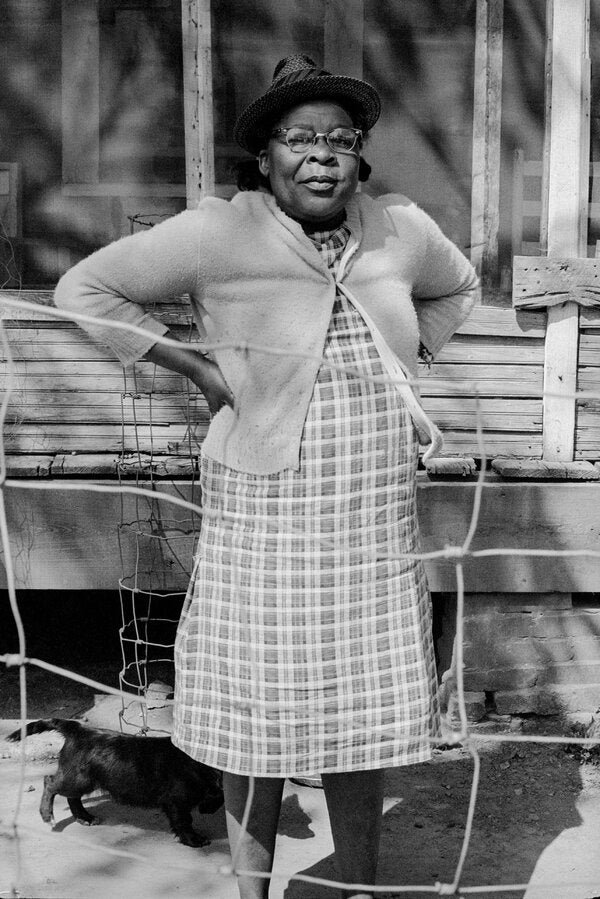 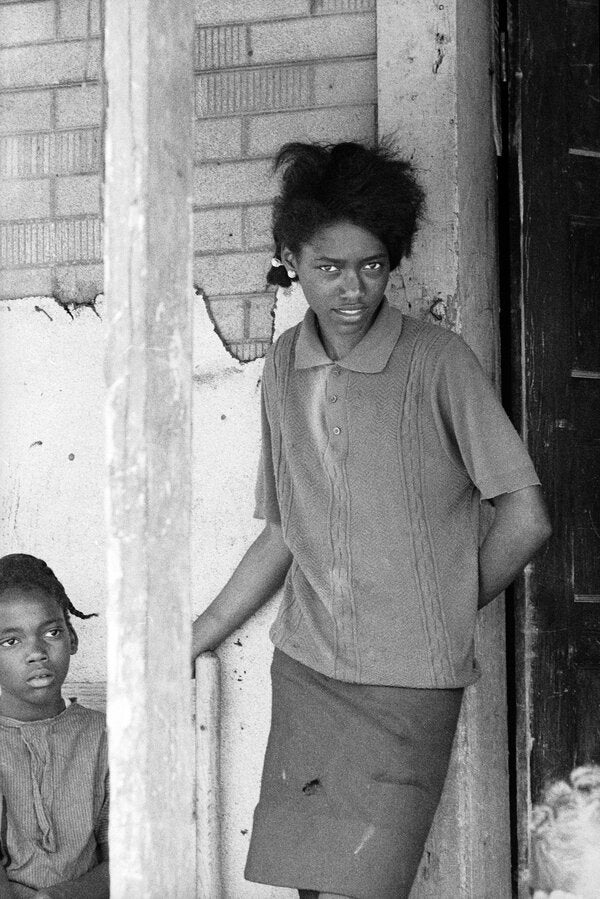 Doris Adelaide Derby was born on Nov. 11, 1939. Her father, Hubert Allen Derby, was a civil servant who had been unable to find work as a civil engineer because of his race, despite having a degree from the University of Pennsylvania; her mother, Lucille Theresa (Johnson) Derby was a homemaker and teacher’s aide.

Doris grew up in Williamsbridge, a neighborhood in the North Bronx that was almost rural at the time. The family kept chickens and ducks, grew vegetables and cultivated fruit trees. Her father supplemented his income making cabinetry; Doris learned woodworking from him, and sewing from her mother, all of which served her well in Mississippi years later, when she oversaw the crafting cooperatives for Liberty House. 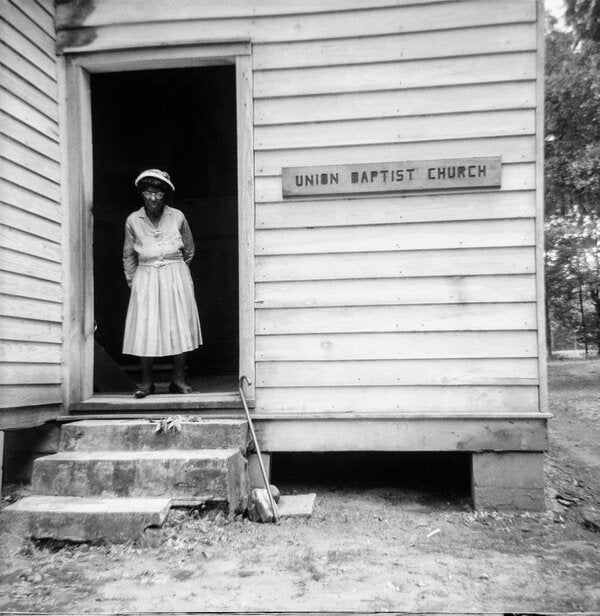 A parishioner of the Union Baptist church in South Carolina in 1972. “The church was the one institution the Black community con­trolled. When the civil rights movement came, the churches were there for political rallies, Freedom Schools, Head Start centers, and Free Southern Theater performances,” Dr. Derby wrote in her book. Credit... Doris Derby

She graduated from Hunter College in 1962 (and was inducted into its hall of fame in 2013). She earned her master’s in anthropology at the University of Illinois Urbana-Champaign in 1975, and her Ph.D. there in 1980. Dr. Derby taught anthropology and African American studies at that institution, as well as at the University of Wisconsin-Madison and the College of Charleston, in South Carolina. From 1990 until her retirement in 2012 or so, she was the director of the Office of African American Student Services and Programs at Georgia State University. She was also an early member of Sistagraphy, a Black women’s photography collective in Atlanta.

She married Robert A. Banks, an actor and voice-over artist, in 1995. They were both salsa enthusiasts. Her husband survives her, as does a sister, Pauline Roland Scott.

In her monograph, Dr. Derby took note of the lack of real progress, despite the energy of the civil rights movement, in places like Mississippi. “There were few clear-cut gains, just as gains were uneven all over the South,” she wrote.

She concluded: “Now is a continuation of then. We are seeing repeats of what we saw back then, like voter suppression and police brutality. When you make strides, the enemy takes steps to block your achievements, and you must do something else.”