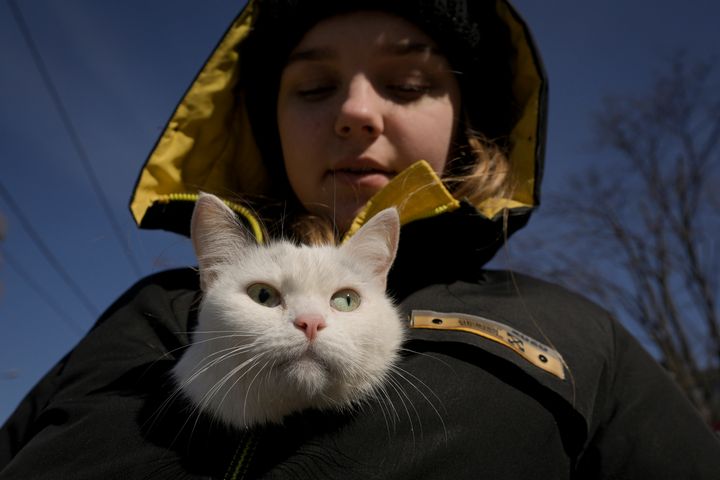 Mounds of abandoned clothes and other personal items lie strewn along corridors leading out of Ukraine. The farther people carry their things, the harder it is, so they leave them behind, said Ludmila Sokol, a gym teacher fleeing Zaporizhzhia in the south.

But their pets, they keep alongside them.

A girl who was evacuated from Irpin keeps a cat warm inside her jacket at a triage point in Kyiv, Ukraine, Friday, March 11, 2022. (AP Photo/Vadim Ghirda)

Everywhere amid the exodus of more than 2.5 million refugees fleeing Russia’s invasion are the pets people could not leave behind: birds, rabbits, hamsters, cats and dogs. 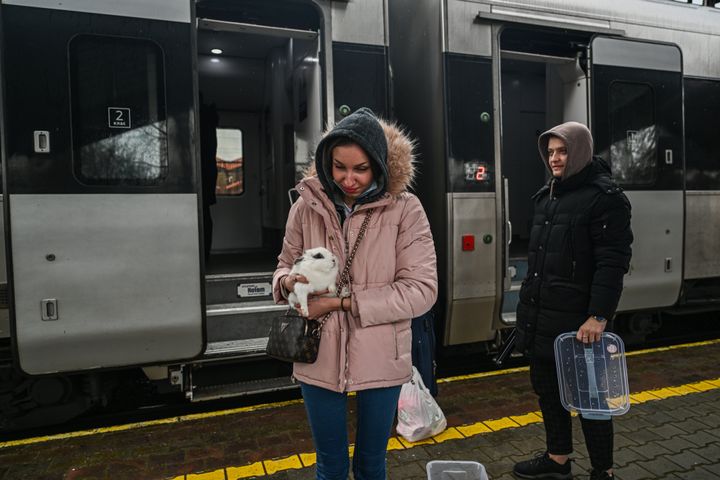 A woman carries a pet rabbit as she exits a train arriving from Kyiv on February 23, 2022 in Przemysl, Poland. (Omar Marques/Getty Images)

People fleeing the outskirts of Kyiv crowded together under a destroyed bridge, carrying little luggage and abandoning their vehicles on the road. But their pets remained with them. 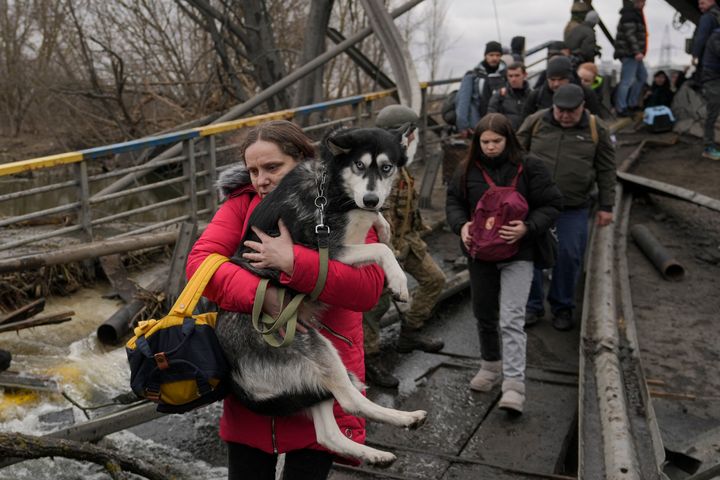 A woman holds a dog while crossing the Irpin river on an improvised path under a bridge, that was destroyed by Ukrainian troops designed to slow any Russian military advance, while fleeing the town of Irpin, Ukraine, Saturday, March 5, 2022.

One woman ferried her dog across an improvised bridge over the Irpin River amid the evacuation. Another at a train station in Poland nuzzled her orange cat, nose to nose. 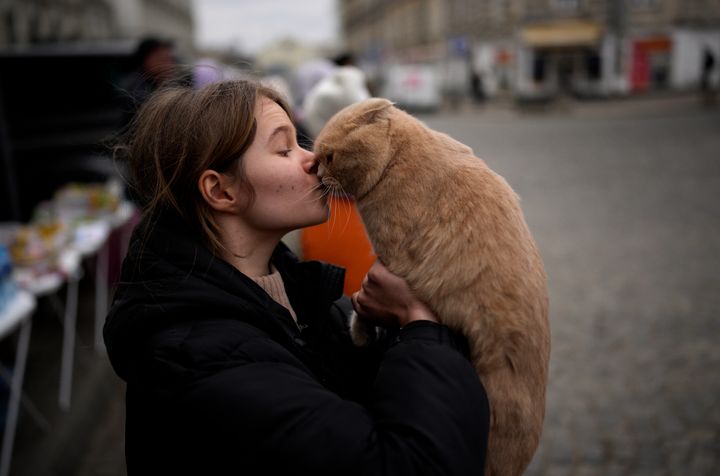 Julia Lazarets plays with her cat Gabriel, after fleeing Ukraine and arriving at the train station in Przemysl, Poland, Tuesday, March 8, 2022.

A young girl wrapped in an aluminized blanket hugged her two Chihuahuas close as she made the crossing into Medyka, Poland.

And in Siret, Romania, a young mother helped her toddler drink from a paper cup as she cuddled her white Chihuahua. Nearby, a Maltese puppy peered out of a plastic bag filled with toothpaste, shampoo and hand lotion. 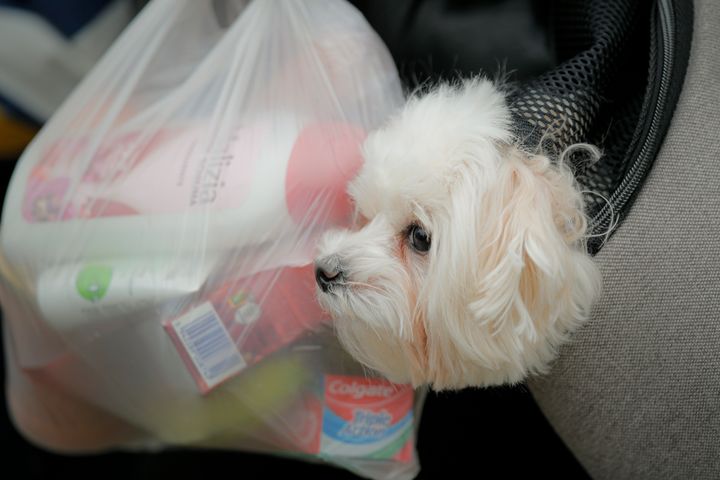 A puppy peers his head from a pet carrier after his owner fled the conflict from neighboring Ukraine at the Romanian-Ukrainian border, in Siret, Romania, Sunday, Feb. 27, 2022.

Grasping her fluffy white dog, an elderly woman who made it to Romania collapsed in exhaustion in a ballroom converted into a refugee shelter. 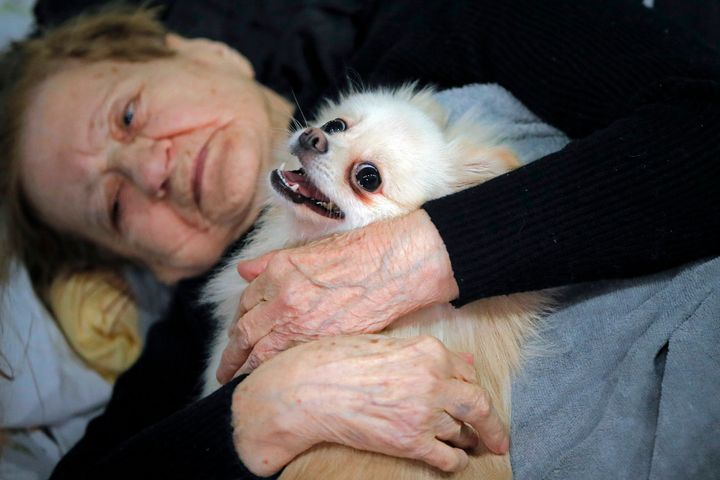 A refugee who fled the Russian invasion from neighboring Ukraine comforts her dog as they sit in a ballroom converted into a makeshift refugee shelter at a 4-star hotel spa, in Suceava, Romania, Friday, March 4, 2022.

Hundreds of thousands are displaced inside Ukraine as well, after fleeing assaults on their hometowns. An 84-year-old woman who gave only her first name, Antonina, sat in a wheelchair at a triage point in Kyiv, holding a miniature poodle and clutching the leashes of her 11 other little dogs after being evacuated from the town of Irpin. 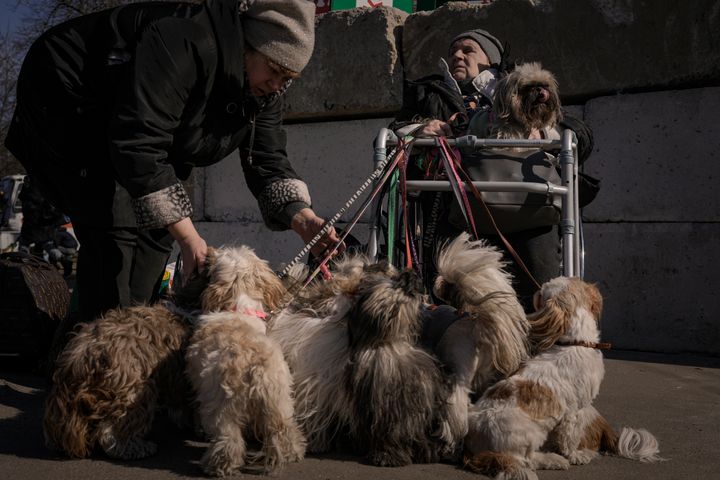 Antonina, 84 years-old, sits in a wheelchair after being evacuated along with her twelve dogs from Irpin, at a triage point in Kyiv, Ukraine, Friday, March 11, 2022. (AP Photo/Vadim Ghirda)

Victoria Trofimenko said she felt an obligation to keep not only her family but her pets safe.

The 42-year-old had originally never planned to leave Kyiv, she told The Associated Press by Zoom days after the war started. 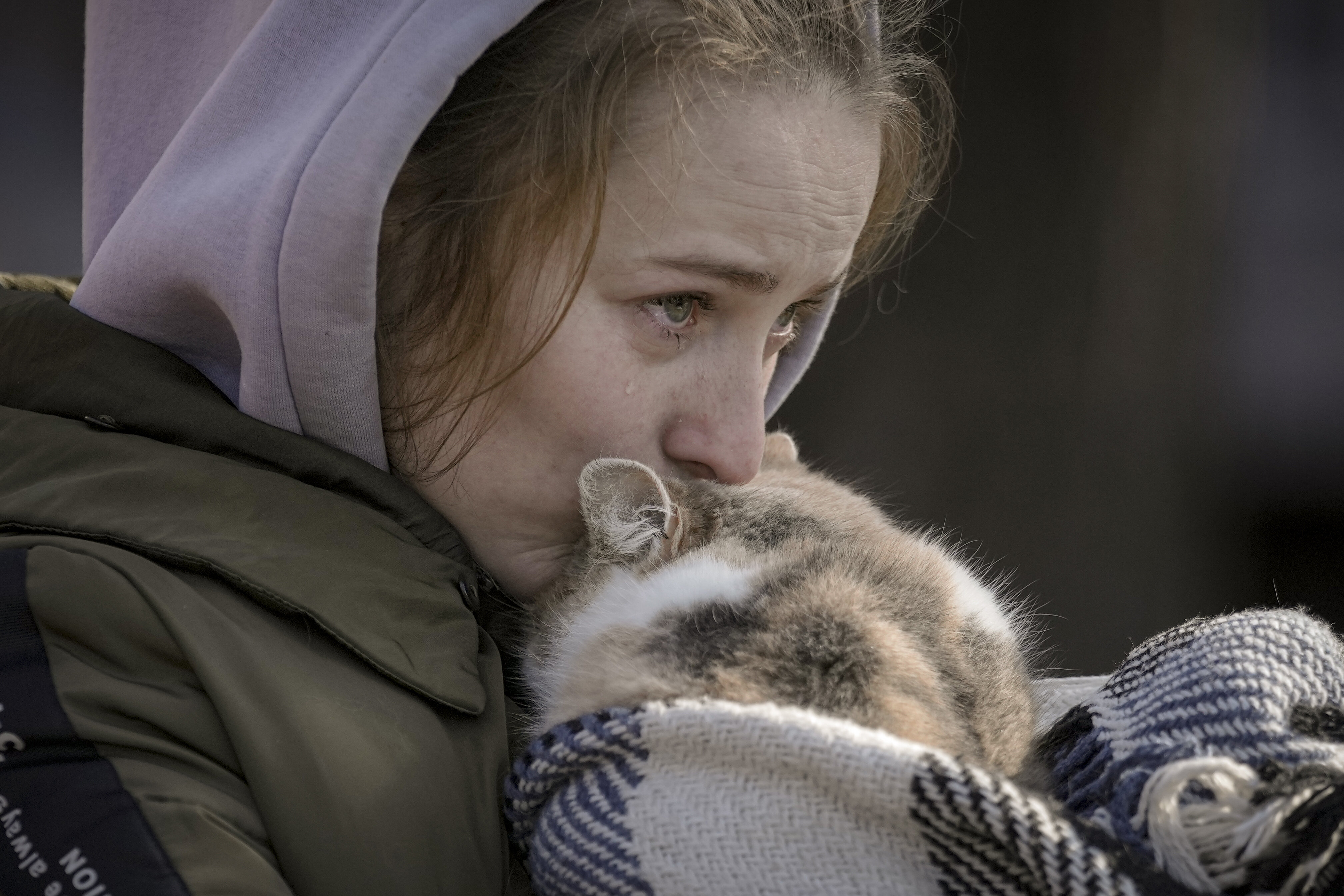 A woman who was evacuated from Irpin cries kissing a cat wrapped in a blanket at a triage point in Kyiv, Ukraine, Friday, March 11, 2022. (AP Photo/Vadim Ghirda)

But as the missiles and explosives rained down she thought about her duty to protect her 18-year-old daughter, 69-year-old mother — and her dog, Akira, and cat, Galileo.

She bought train tickets to head west, eventually ending up in Prague. She said she first arrived in Hungary, though, and was grateful to have Akira by her side for protection.

“I can’t leave dogs or cats. I have to take responsibility,” she said. 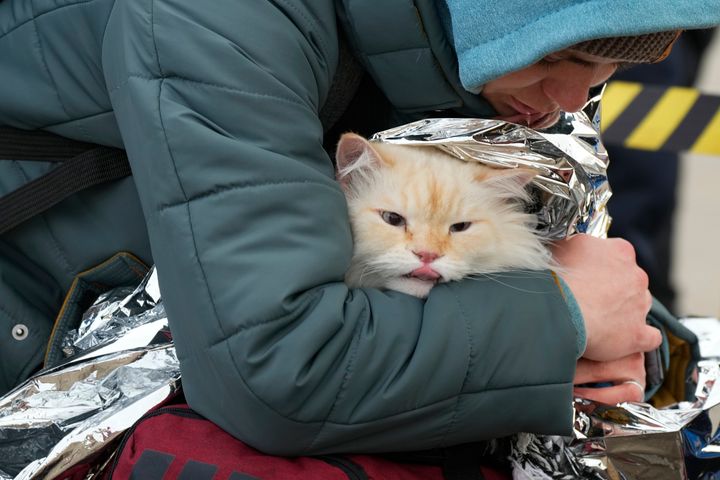 Ukrainian Anastasia Klimenko covers a cat named Amur with a blanket after fleeing the war from neighbouring Ukraine, at the border crossing in Palanca, Moldova, Thursday, March 10, 2022. (AP Photo/Sergei Grits) 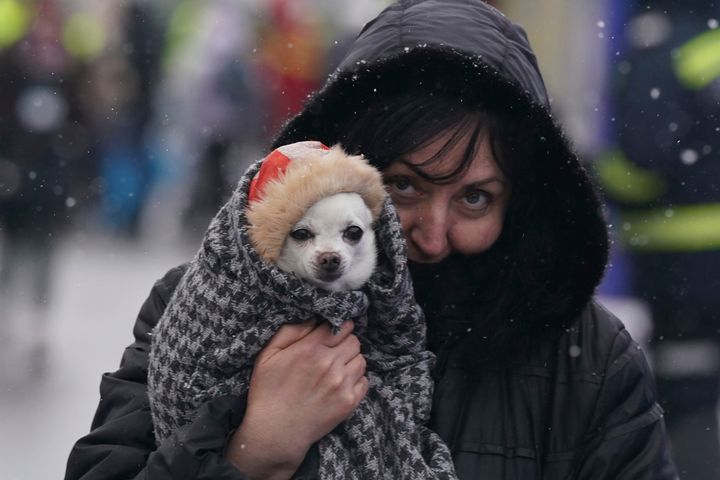 A woman carries her dog across the border from Ukraine to Siret, Romania, Wednesday, March 2, 2022, amid Russia´s invasion of Ukraine. (AP Photo/Fernando Llano) 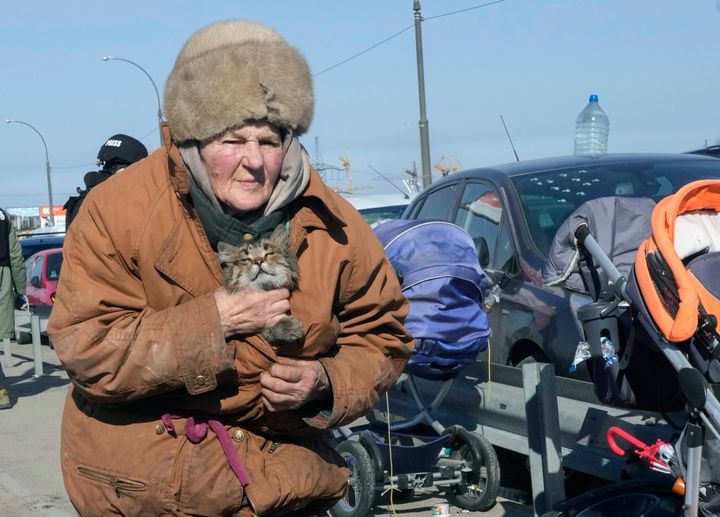 An elderly woman carries her cat as she flees from her hometown on the road towards Kyiv, in the town of Irpin, some 25 km (16 miles) northwest of Kyiv, Saturday, March 12, 2022. (AP Photo/Efrem Lukatsky)