Opinion: On the 'Putin Show' there is trash talk, massive tables and very little progress

Frida Ghitis, (@fridaghitis) a former CNN producer and correspondent, is a world affairs columnist. She is a weekly opinion contributor to CNN, a contributing columnist to The Washington Post and a columnist for World Politics Review. The views expressed in this commentary are her own. View more opinion on CNN.

(CNN)With Russian troops massed on Ukraine's borders, the United States and its allies are scrambling for the right formula to communicate to Russian President Vladimir Putin their determination to prevent war -- and dissuade him from launching an invasion.

But what is the best language to use with autocrats?

Putin offered a cringe-inducing look into the strongman's lexicon during a news conference with his French counterpart in Moscow this week. Speaking alongside President Emmanuel Macron, Putin was asked about the Minsk agreements -- the 2015 accords that aimed to bring a ceasefire between Russian-backed separatists in eastern Ukraine and the government.

The Ukraine government, Putin noted, does not like the agreement. "Like it or not," Putin jived, "it's your duty, my beauty." The saying, as Russian journalists told Putin's spokesman the next day, has well-known sexual connotations.

Putin's spokesman, Dmitry Peskov, predictably denied the implication, and Ukrainian President Volodomyr Zelensky tried to blend humor with poignancy when asked by reporters about the offensive comment. He said: "Ukraine is a beauty," but the "my," is an "overstatement," meaning it does not belong to Russia or to Putin.

Putin's salty, bullying language is nothing new. His tough talk -- the autocrat's calling card -- is also an emblem of his populist man-of-the-people bona fides. This is the leader who once famously vowed to catch Chechen terrorists in the toilet and "wipe them out in the outhouse."

Putin's words, however, are only a part of his playbook. Among autocratic leaders, the display of power and intimidation is a key tactic. We've seen it many times, in many forms. 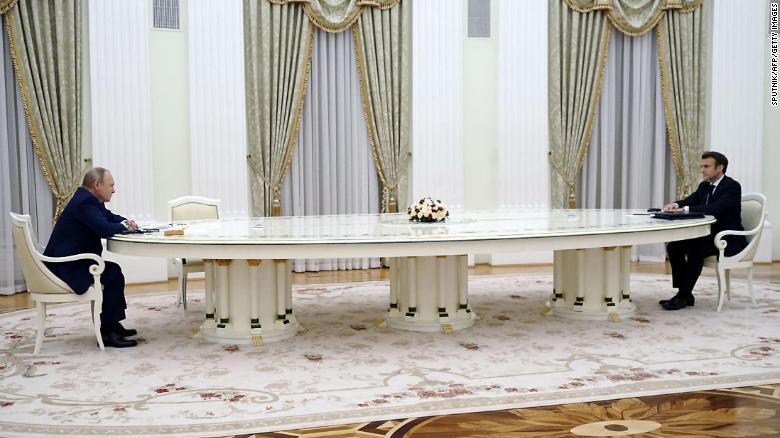 On Monday, that ridiculously long table separating Putin from Macron during talks at the Kremlin may have looked like pandemic protection, but the physical distance was not needed; there's a good chance Macron tested for Covid-19 before meeting the Russian president.

In fact, Putin seemed to have no qualms about standing alongside China's Xi Jinping in Beijing last week. The distance is a symbol of, well, distance. "Emmanuel, you're not my friend," it said; unlike Xi.

As Macron undoubtedly knows, when dealing with a country ruled by an autocrat, the only thing that matters is the relationship with the leader. Macron tried to cajole former US President Donald Trump before, first with niceties, then with a show of musculature. Who can forget that bizarre 2017 Macron-Trump handshake; the two macho men trying to impress one another?

Macron's Moscow visit this week produced humiliation -- at least so far. After the talks, France announced that Putin had agreed to refrain from new military maneuvers near Ukraine, for the moment. The Kremlin's Peskov later said he had no idea what the French were talking about; a slap in Macron's face. 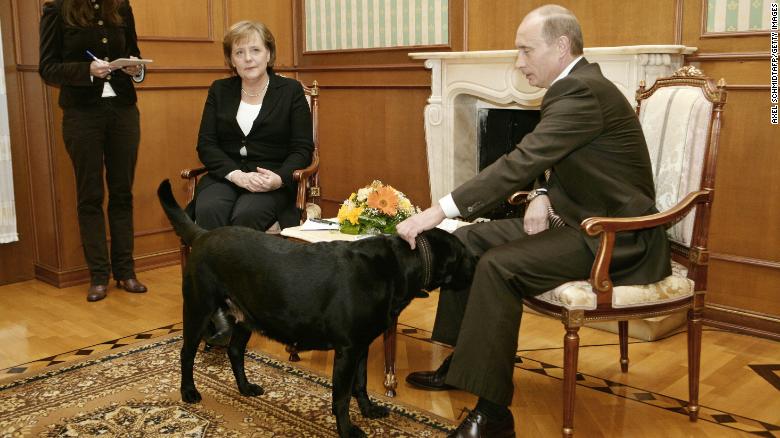 Putin's shows of force with European leaders have been occasionally more crass, if sometimes less consequential. In a 2007 meeting with then-German Chancellor Angela Merkel at his summer house in Sochi, he famously released his big black Labrador. Merkel is reportedly afraid of dogs. A photograph captures Putin smirking while Merkel tries to keep her terror -- and perhaps anger -- in check.

The substance of relations, of course, matters. But in an autocracy, policy becomes hyper-personalized. In her book, "There's Nothing for You Here," Fiona Hill, Trump's top Russia policy hand in the National Security Council wrote that Putin essentially invented the modern style of "personalized, bravura" leadership -- one that other leaders with autocratic tendencies, including Trump, tried to emulate.

Because negotiating successfully with the US required gaining favor with Trump, Hill recalls, foreign officials tried to ply Trump with over-the-top praise. She says her office "closely tracked" efforts to flatter the President, because of their foreign policy implications.

Trump's first trip abroad, to Saudi Arabia in 2017, featured a surreal reception, complete with a four-stories-high image of Trump's face projected onto the side of the Ritz-Carlton hotel in Riyadh. The adulation seemed to pay off in policy. Just after Trump left the kingdom, Saudi Arabia led a boycott of Qatar, a country that houses a major US military base. Trump sided with the Saudis. 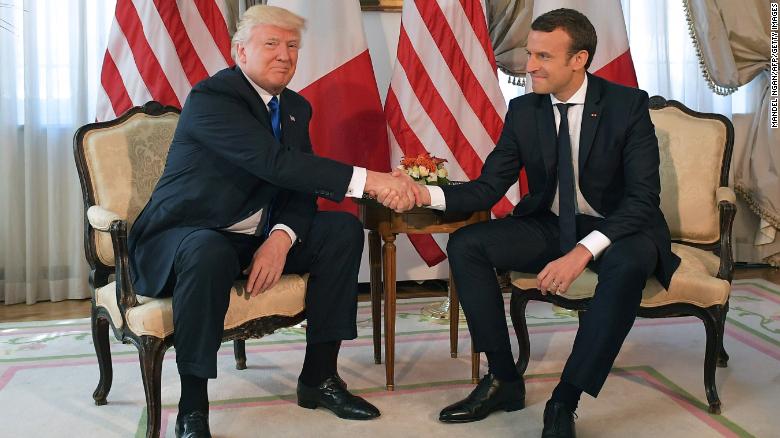 Populist autocrats may impress their autocratic counterparts. Trump frequently expressed his admiration for Putin and even envy of other all-powerful autocrats. But, however much admiration it inspired among certain people, the autocratic style of leadership is harmful to their countries. As Hill notes: "Personalized leadership tilts the playing field away from good governance ... toward corruption and nepotism."

Russia plainly displays that and other ills of autocracy.

Still, the world needs to adjust its methods to deal with Putin. His negotiating style has been endlessly analyzed. Putin doesn't appear particularly vulnerable to praise. Like other strongmen, however, he respects strength, but a minutes-long Macron handshake won't do.

The current standoff over NATO, and over the ability of Russia's neighbors to determine their own future, will require determination, unity, and a clear-eyed memory about the lessons of the past. Macho energy is not a requirement, as Merkel demonstrated in her role as Europe's chief negotiator.

Above all, this moment demands understanding that the world is facing an authoritarian leader accustomed to bullying and intimidating. In the end, it's not so much Russia facing off against Ukraine or against the West, as it is its authoritarian President. The West is scrambling for the right language because this, as Russia's neighbors and the rest of the world know, is Putin's show.