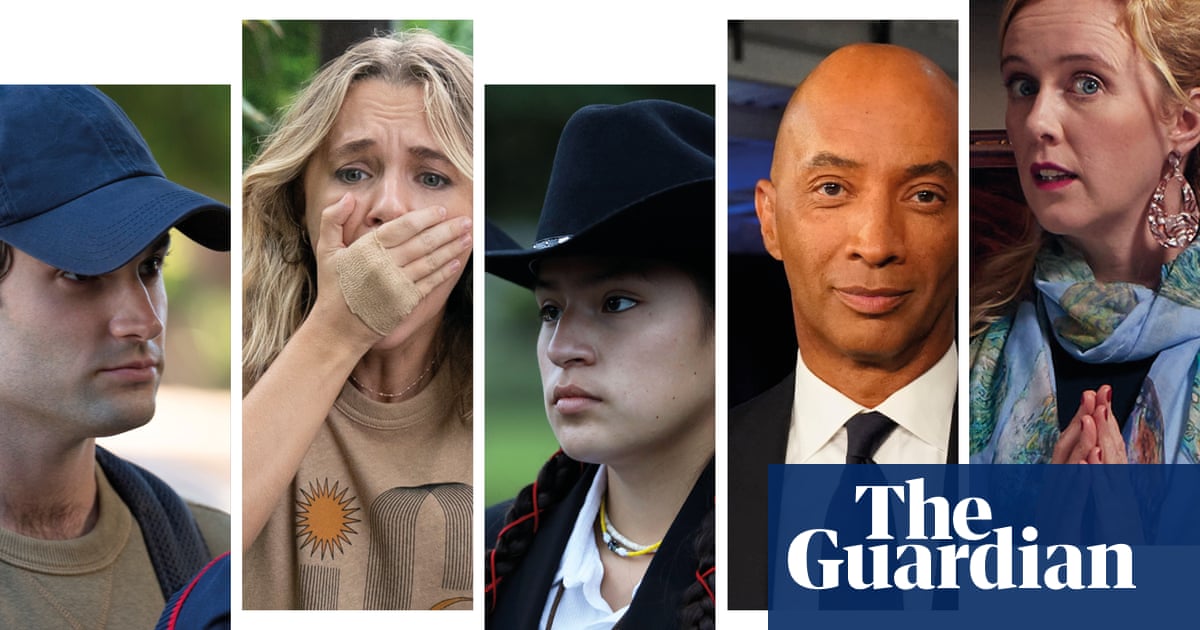 Reservation Dogs to You: the seven best shows to stream this week

Show caption (From left) You; I Know What You Did Last Summer; Reservation Dogs; Soul of a Nation; Good Grief
The seven best shows to stream this week

A delightful new comedy about a gang of Indigenous Americans, and the return of Netflix’s stalker thriller. Plus, I Know What You Did Last Summer

Pick of the week

Disney+, from Wednesday 13 October “You’re good thieves. The best in town. But it is a small town… ” Teen gang Reservation Dogs run the petty crime game in their little corner of Oklahoma as they try to raise enough money to escape to California. But there’s an innocence to their criminality – as we join them, they’re ineptly stealing a lorry-load of potato chips. This delightfully wide-eyed new comedy from Sterlin Harjo and Taika Waititi features an almost entirely Indigenous American cast and crew. But there’s no sense of boxes being ticked – there’s a lightness of touch, a gift for the absurd and an underlying sweetness that bears comparison with Waititi’s charming story Hunt for the Wilderpeople.

Sundance Now via Amazon, out now There’s a tendency to compare every comedy that emerges from New Zealand to Flight of the Conchords. But this sitcom feels a good deal less knowing and arch than Jemaine Clement and Bret McKenzie’s masterpiece. Written and performed by sisters Eve and Grace Palmer, it follows fictional siblings Ellie and Gwen as they inherit their late grandfather’s funeral parlour and try to work out how to run it without causing bankruptcy or wild offence. Think Six Feet Under with existential insight jostling for space with berserk slapstick and you’ll be in the right ballpark.

BBC Three, from Tuesday 12 October According to this intriguing documentary, Black people are three times more likely to start new businesses than white people. However, they are also less likely to be able to get these businesses off the ground. Presenter Aaron Roach Bridgeman explores Black business in the context of an idea that, while not new, gained a greater degree of traction in the wake of the murder of George Floyd: “spending Black”. Could consumers deciding to financially prioritise Black-owned businesses offer the community a greater degree of autonomy?

Convergence: Courage in a Crisis

Netflix, from Tuesday It might be a good sign that – in countries with access to vaccines at least – we’ve reached the “documentary epic” stage of the Covid-19 pandemic. This film (from The White Helmets director Orlando von Einsiedel) uses a mixture of professional footage and citizen journalism to tell the story of our era – how a virus spread across the globe and upended normality in the process. Spanning eight countries, it features nine individual stories and the emphasis is very much on whether humanity can learn from the ordeal it has faced.

Soul of a Nation

Disney+, from Wednesday 13 October This documentary series exploring the Black experience in the US aims to constructively address the ramifications of American racism. Contributor Byron Pitts describes it as “a family reunion but one at which hard truths are spoken”. Each episode deals with a specific theme: subjects range from the arguments for reparations being paid to victims of historical discrimination to anti-racist activism in sports. The common thread is an attempt to connect the errors and injustices of the past with possible solutions in the present and future.

Netflix, from Friday 15 October Penn Badgley dons his trademark baseball cap once again, as he slinks in the shadows in series three of Netflix’s soapy, smash-hit thriller. We last saw TV’s most menacing bookseller, Joe Goldberg, seemingly settling into family life with his pregnant girlfriend Love (Victoria Pedretti), but will fatherhood and a move to the suburbs curb his penchant for stalking and false imprisonment? Not a chance. Saffron Burrows also returns as Love’s hippy mum, Dottie, with Tati Gabrielle (Chilling Adventures of Sabrina) joining the cast.

I Know What You Did Last Summer

Amazon Prime Video, from Friday The blood-soaked 1997 teen slasher classic about a group of high-schoolers who cover up a killing gets a TV reworking. It feels like simultaneously a high-risk and slightly unambitious manoeuvre – clearly tampering with such familiar source material could backfire but, then again, curiosity views alone will surely justify the show’s existence. It’s a pretty faithful rendering albeit with a glossier veneer and, of course, smartphones and social media as new narrative toys. Madison Iseman, Brianne Tju and Ezekiel Goodman are among the stars.