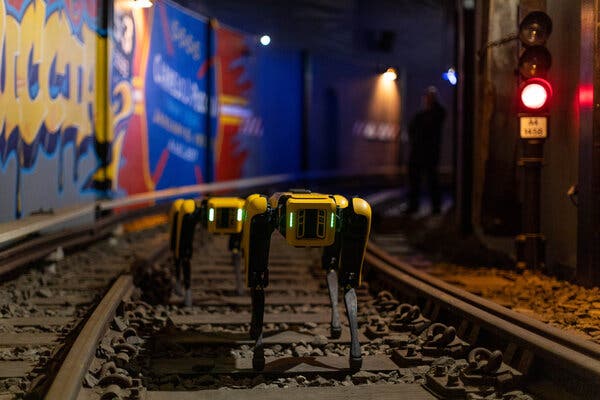 Plans to use two new robot dogs only in precarious search and rescue missions may help avoid the controversy that met the Police Department’s robots last year. 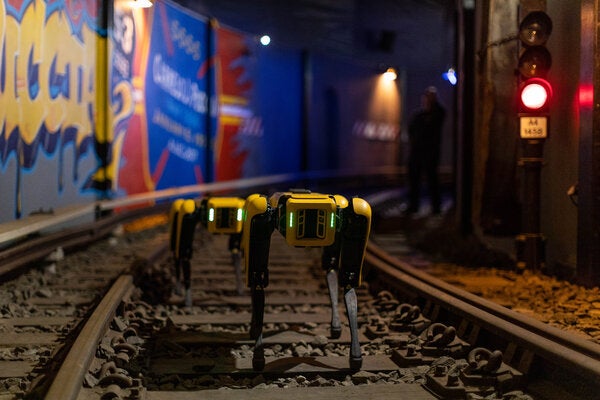 The New York Fire Department purchased two Spot robots and plans to use them to venture into hazardous situations.  Credit... Mostafa Bassim for The New York Times

Inside a dimly lit tunnel along a stretch of simulated subway track, one of the New York Fire Department’s new dogs showed off a few of its tricks. Lie down. Roll over. Stay.

But the most remarkable things that the two robotic dogs can do were mastered by real dogs long ago: jogging across rugged terrain, hopping over small obstacles and helping keep their masters out of harm’s way.

The department, which plans to deploy the robots in the months ahead, is the first fire agency in the country to purchase the 70-pound machines, which cost $75,000 each and are built and sold by Boston Dynamics, a robotics company.

The department plans to use the robots to aid in some of its most precarious search and rescue missions, which might help avoid the furious backlash that erupted when the New York Police Department began using the same technology.

The Police Department cut short its contract with Boston Dynamics last April after critics raised concerns about privacy, data collection, aggressive police tactics and the generally dystopian vibes the robot gave off as it trotted through a public housing development during a hostage situation.

Fire officials and robotics experts say the way the department plans to use the robots might help reshape the perception of their use for public safety purposes.

At the command of a human operator, the device can provide vital information in the midst of a calamitous event. It has the ability to descend deep underground after a steam leak to collect images and data about dangerous debris. It can also be deployed moments after a building collapse to gauge structural integrity or measure the concentration of toxic, flammable gasses like carbon monoxide to better inform firefighters responding to the scene.

The real-life scenarios in which the robots, known as Spot, will be used are far different from Hollywood depictions in which humanoid or animalistic machines often inflict damage and invoke fear, said Capt. Michael Leo from the Fire Department’s robotics unit.

“The TV industry and the movie industry are hurting us in some ways because they often show pictures of robots that are weaponized, and then people think that’s how all robots are,” Captain Leo said.

“Our whole mission is a lifesaving one,” he added. “That’s the core thing. These robots will save lives.”

In the Bronx, where 17 people were killed in an apartment fire earlier this year, using the robots to enter hazardous conditions could save the lives of firefighters and others, Borough President Vanessa L. Gibson said.

“I look forward to a positive and productive conversation with F.D.N.Y. leaders to ensure these robotic ‘dogs’ are only being used on rare, specialized, occasions with a goal of protecting our residents and first responders,” Ms. Gibson said in a statement.

A Fire Department spokesman said the robots would only collect data on hazardous materials situations and added that department compliance officers had been trained on confidentiality rules. But Albert Fox Cahn, a lawyer who is the executive director of the Surveillance Technology Oversight Project, expressed concerns about what data the Fire Department robots might collect, and how that data could be used in the future.

“When agencies buy these new systems, they always point to the best case scenario for use,” Mr. Cahn said. “And I agree, if it actually is used in ways that keeps firefighters safe, that would be great. But the history has always been that even if it’s first brought in for a compelling case, you get this creep where it’s used for more and more scenarios until it’s reaching areas where it just doesn’t feel justifiable.” 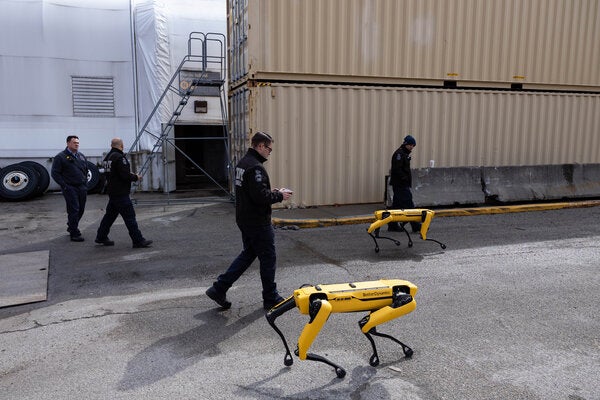 The Fire Department’s robotics team has been practicing with the robots, which operate remotely with a device similar to a video game controller. Credit... Mostafa Bassim for The New York Times

Boston Dynamics said it first made its Spot robots commercially available for lease in 2019, and began selling them in 2020. The company predicts that it will have sold over 1,000 units by the end of this year, said Nikolas Noel, a company spokesman.

In that time, the company has worked to reverse the negative image of robots: Spot made a guest appearance last month on “The Tonight Show,” and recently had a cameo role in the first episode of “The Book of Boba Fett,” as a docile, sheeplike animal. The Fire Department also has plans to show the dog to school STEM programs across the city.

But concerns about privacy, surveillance and cybersecurity doomed the robots’ earlier rollout in New York.

The robots first came under scrutiny when the Police Department, responding to a home invasion, sent the dog in to determine whether anyone was still inside an apartment. More criticism followed after the robot was seen out with officers in the lobby of a public housing building in Manhattan.

At the time, John Miller, the Police Department’s deputy commissioner for intelligence and counterterrorism, said the department had terminated its lease early because the device became a “target” for critics who he said used the robot to fuel debate over race and surveillance.

City Council members later introduced legislation to prohibit the Police Department from using or threatening to use any robot armed with a weapon. (That legislation did not pass, and weaponizing Spot is strictly against the company’s code of ethics, Mr. Noel said.)

Peter Asaro, the co-founder of the International Committee for Robot Arms Control and a spokesperson for the Campaign to Stop Killer Robots, has worked with the United Nations for nearly a decade to ban the use of weaponized robots on a global scale.

For Professor Asaro, who is also a faculty member at the New School, more education and outreach are key — particularly when it comes to robotics and public safety.

“The rollout of Spot by the N.Y.P.D. was very poor,” he said. “They didn’t really explain to anybody what they had used it for; it just showed up. There’s also potentially good uses of robots by police — but you have to be very careful about keeping clear that it’s not weaponized, and that it’s not collecting surveillance.”

“There are always concerns over robots capturing imagery of tragic scenes, and you do want to see strong control of that information once it’s collected,” he added. “Other than that, I don’t really see any situations where the Fire Department could use this in a way that potentially hurts people.”

The Fire Department first turned its attention to ground robotics almost 10 years ago, when members began to explore how these devices could assist firefighters in the field.

But older models had significant shortcomings. The department tried out several ground robots before purchasing a promising machine in 2014 called Super Droid. The bulky, red robot had caterpillar tracks that propelled it forward or backward on bands of tread like those found on military tanks, and could be used to detect some hazardous materials.

Operators, however, quickly discovered it was too cumbersome to perform some basic functions well, like maneuvering up steep stairs or over large piles of rubble. The agency soon began searching for a replacement. By the summer of 2020, when robotics became a stand alone unit within the department, the team already had its eyes on Spot.

“It’s superior in every capacity. This is the most reliable technology of its kind out there,” said Captain Leo as he stood in between the three now-retired Super Droid robots — clunky compared to Spot’s sleek yellow-and-black frame.

While his unit often deploys drones in smoky conditions to capture aerial footage of a fire, Spot is designed to take on rarer, mostly non-fire related assignments like monitoring the air for an array of hazardous materials or traversing a subway tunnel where flying drones would stir up a swirl of dust, clouding its onboard cameras.

“It’s like every piece of equipment we have,” he said. “We hope to never, ever have to use it. But when we need it, it’s important that we have the right thing.”