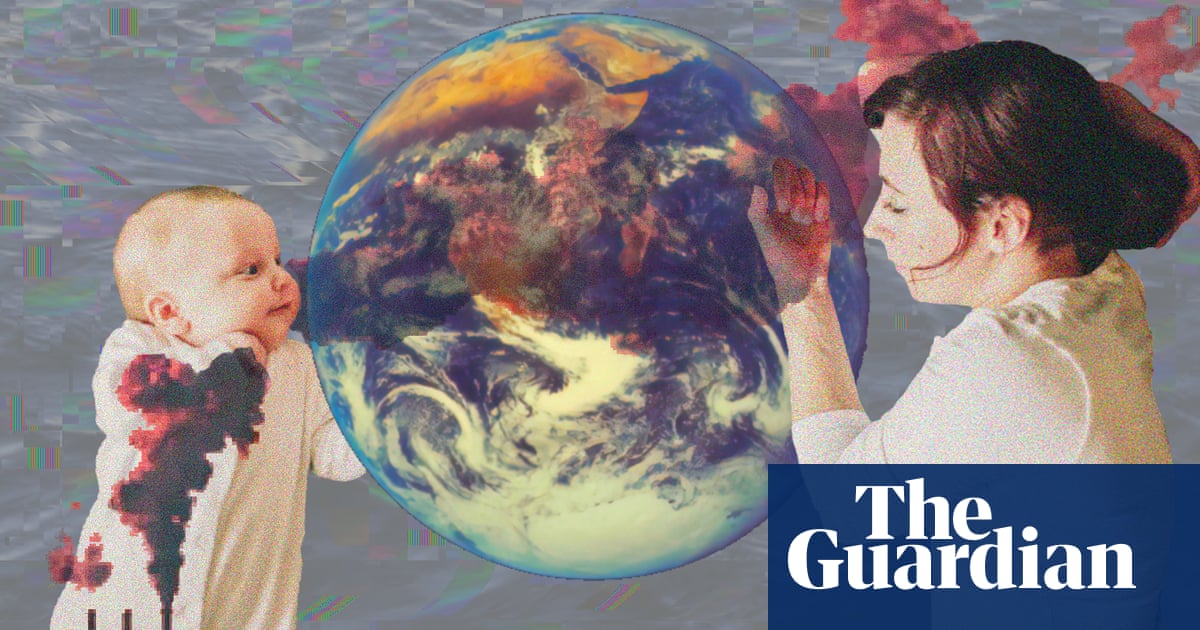 Should I have children? Weighing parenthood amid the climate crisis

Show caption Thinking about parenthood in the age of climate change: ‘It’s useful for everyone to think more broadly about what family means.’ Composite: The Guardian/Getty Images
Life and style

Young people are calculating the consequences of the climate crisis on their future, particularly with regards to childbearing

One evening last summer, I was running through a damp field on my farm in Vermont with my 10-year-old and a passel of dogs. We were barefoot and laughing. Suddenly, my daughter turned to me with a serious look in her eyes.

“I didn’t realize things were going to get so bad so soon,” she said.

“What things?” I asked. Was she thinking about the heatwave in Vermont, forest fires in California or the pandemic?

Lately, when my daughters begin the sentence “when I have children … ” my chest aches. I know they can live fulfilling lives without traditional parenthood, but I wish them a future where they have options – one that I suspect is moving quickly out of reach. Some models predict significant global ecological and environmental collapse by 2040 – within my lifetime, as well as my children’s.

It’s not only my children seeking honest answers and advice. Just before the pandemic, two students entered my office and professed they no longer felt it wise to have children. Recent polling reveals that four in 10 young people are “hesitant to have children as a result of the climate crisis” and “fear that governments are doing too little to prevent climate catastrophe”.

Each of my students asked: What would you do?

Are we prepared to answer these questions honestly for the ones we love and advise? Moreover, should we? As a mother of two, my decision – fraught even 13 years ago – has already been made. My challenge now is to help my children process reality in an age-appropriate way, and prepare for it.

Last week, my eldest daughter was flipping blueberry pancakes. “Mom,” she said. “I just read an article that says anyone under 40 will have a hard life because of climate change. Is that true?”

“I think it will be hard,” I said, choosing my words carefully. “But we’ll continue to find beauty in the world, and help others.” My daughter returned to her pancakes.

I felt sick. This is the first year I’ve had to witness my daughters’ fear of the future. I respect them too much to obfuscate the truth: the world is becoming increasingly warm, volatile and inequitable. Research indicates we have a mere decade left to address climate change in “an unprecedented, transformational way” in order to avoid global catastrophe.

Children participate in a rally in Glasgow during Cop26. Photograph: Xinhua/Rex/Shutterstock

Young people are already calculating how much suffering they will witness or bear themselves, and what this means for their futures, particularly with regards to child-bearing.

“I do feel like this is something that’s been discussed a fair amount in circles I run in,” my former student Mollie, 22, shared with me via email. “Especially when conversations turn more pessimistic. Someone usually says, ‘I don’t even want to have kids’ or ‘the next generation is totally fucked; we can’t have kids.’ This conversation often leaves me angry and unsettled, because it forces me to wrap my mind around something completely unfathomable at the moment: what is our earth going to look like in 2050, when I might have kids trying to start lives of their own? Would it be unethical to bring someone into that world, however it may look?”

My former research assistant Ellie, 23, agrees. “I hope it doesn’t sound melodramatic to say that I’m deeply afraid of the things I’ll see in my lifetime. Even if humanity gets its act together, I can’t imagine what my kids would see in theirs.”

Whether or not to procreate is an extremely controversial question, and another example of how climate scrutiny often falls upon individual actions, when it’s the governmental and capitalist systems that have made life on the planet untenable. It’s abhorrent that the burden of environmental collapse falls first on the shoulders of young people and the global south, when oil corporations and countries like the United States carry an outsized responsibility for the crisis.

And yet our planet’s resources are straining under the global population, which is approaching eight billion.

Many climate activists avoid mentioning childbirth because of its association with population control and eugenics. “The conversation is often reductive and racist,” farmer and environmental sociologist Dr Isaac Leslie told me on a call. “White people too often blame Black and Brown women for having children when the issue isn’t population – it is consumption. Consumption is what’s linked to environmental destruction. The conversation should be about capitalism and climate change, not about controlling the bodies of people who give birth.”

The Center for Biological Diversity notes on their population growth page: “Under current conditions, a child born in the US will be responsible for almost seven times the carbon emissions of a child born in China, and 168 times the impact of a child born in Bangladesh.” Children born into poverty are not driving the climate crisis, but they will suffer its impact in an outsized way.

Children play near a house engulfed by sea water due to the rising sea levels in Bedono village, central Java. Photograph: Dita Alangkara/AP

Dr Jaya Tiwari, the vice-president of Boma Project, an NGO focused on graduating women from extreme poverty in the face of climate change, has witnessed the inequities of child-rearing first-hand. She made personal decisions accordingly.

“As someone growing up in India”, she told me, “the second most populous country in the world – and as someone who has devoted a majority of her professional life to working on development issues in the dry lands of Africa, and in regions that sit at the intersection of poverty, gender inequality and climate change – I agonized about the question of motherhood and what my choice to have a child meant for myself, my family and my planet. The fact that we ended up with an only child is an indication of where I ultimately landed.”

Given the increasing impact and risk of childbirth, it’s imperative that people who give birth have absolute control over their bodies and unfettered access to reproductive healthcare. “The vortex of poverty, the lack of access to education and reproductive rights, the struggle for resources and continued climate pressure creates a cycle that feeds upon itself,” Tiwari tells me. “We have indisputable global evidence that education for girls correlates to having fewer children and living healthier lives.” According to Project Drawdown, a non-profit focused on data-driven climate solutions, increased family planning and education of women “could prevent 120 gigatons of greenhouse gases by 2050 – more than on- and offshore wind combined.”

When relatively privileged individuals consider childbirth, they imagine avoiding the nightmarish scenarios many parents are already living. More than 100,000 children have been born in refugee camps in Myanmar and in Bangladesh’s Cox’s Bazar, the largest refugee settlement in the world, which is vulnerable to extreme flooding and landslides.

“We often talk tongue-in-cheek about the apocalypse”, Leslie told me. “Society and humanity will continue, but the question is what gross inequalities will continue with it.”

To be clear, I fundamentally believe it’s unethical to interfere with reproductive choices at the individual level. Plus, families largely make emotional decisions, not data-driven ones.

My students, while fearful, also express hope that we might leverage technology and legislation to turn things around. George, 23, told me via email that “as someone who just spent his entire summer outside with kids, I still definitely want children. I think I will have to see how climate legislation evolves in the next five years to make the call whether or not they are biologically mine – because I’m certainly anxious about bringing a child into calamity.”

I would offer these points of deliberation for someone considering having a child:

Younger generations are often more progressive about the notion of building families.

My student Ellie wrote, “While I don’t believe the changes we’re seeing have to signify end-of-days, I do believe there are incredibly thoughtful solutions at hand which – if we can pull them off – would bring about a world I’d very much want to have children in. But I also think my generation may have found itself at a unique moment in which more people isn’t the answer, and alternatives like adoption represent more eco- and ultimately, human-conscious choices.”

Queer communities present thoughtful models potential parents can learn from. Leslie tells me they spent years letting go of the idea of having biological children and grieving it. “Queerness and climate intersect in the talk about children,” Leslie said, noting possible plans to create a family through fostering, and building space for queer community on a farm with their partner, Wichie.

“It’s hard to separate what we really want from what we’ve been socialized to think we need to be happy,” Leslie says. “Now that I’ve seen what chosen family can be, I’m no longer attached to the concept of biological family.”

“Climate resilience is community resilience,” Leslie’s partner, Wichie, tells me. “We understand that we’re preparing for the future. We’ll teach our children how to grow food and think about the betterment of their communities.”

As mentors, friends, and parents of younger generations, many of us must be willing to listen and engage in meaningful conversations about climate pressure and child rearing. I suggest the following tips:

Conversations about procreation are sometimes less about parenting logistics, and ultimately more about the health and promise of the future – and how we will care for one another as things get harder.

“Despairing is easy,” Leslie said to me, “and it’s offensive. You have to believe that there is some sort of joyful future ahead. In queer culture, we have always celebrated sex and life amidst death. We can hold these things together. People are creative; as a Jew in the diaspora, I think about this all the time. Marginalized communities still carry the spirit and strategies of their chosen families and ancestors. Social connection and joy are part of building resilient communities.”

When my daughters ask me again if they should have children, I will be inclined to say no. Instead, I will say: I leave that decision up to you, but you will want to be intentional, and consider how you are participating in a resilient community.

Ultimately, I will do my best to listen.