The Little Big Dogs of Invention

This is a story about two dogs I know. It is also a story of the U.S. Navy, aviation, and nuclear weapons. Sometimes it is easy to see things in dogs or other people, but hard to see those same things in ourselves. It’s a good thing that dogs can’t read (that we know of) because this is a bit of an embarrassing story for Doc. He’s a sweet good-natured dog and he’s a rather large labradoodle. He occasionally visits another usually good-natured dog, Rocky — a sheltie who is much smaller than Doc.

I say Rocky is good-natured and with people, he is. But he doesn’t care so much for other dogs. I often suspect he doesn’t realize he’s a dog and he is puzzled by how other dogs behave. You would think that when Doc comes to visit, the big dog would lord it over the little dog, right? Turns out, Doc doesn’t realize he’s way bigger than Rocky and — apparently — Rocky doesn’t realize he should be terrified of Doc. So Rocky bullies Doc to the point of embarrassment. Rocky will block him from the door, for example, and Doc will sit quaking unable to muster the courage to pass the formidable Rocky.

It makes you wonder how many times we could do something except for the fact that we “know” we can’t do it. Or we believe someone who tells us we can’t. Doc could barge right past Rocky if he wanted to and he could also put Rocky in his place. But he doesn’t realize that those things are possible.

You see this a lot in the areas of technology and innovation. Often big advances come from people who don’t know that the experts say something is impossible or they don’t believe them. Case in point: people were anxious to fly around the start of the 1900s. People had dreamed of flying since the dawn of time and it seemed like it might actually be possible. People like Alberto Santos-Dumont, the Wright brothers, Clément Ader, and Gustave Whitehead all have claimed that they were the first to fly. Others like Sir George Cayley, William Henson, Otto Lilienthal, and Octave Chanute were all experimenting with gliders and powered craft even earlier with some success.

In the future, the U.S. Navy would become a heavy user of airplanes. But Rear Admiral George Melville, the Engineer-in-Chief of the Navy in 1901 wrote an article for the North American Review about people’s desire to fly. He considered the idea to be childish and a waste of effort, saying  there was no other field where “so much inventive seed has been sown with so little return.” The Navy was conspicuously in error on this topic as the director of the U.S. Naval Observatory stated in 1902 that “Flight by machines heavier than air is impractical and insignificant, if not utterly impossible.” 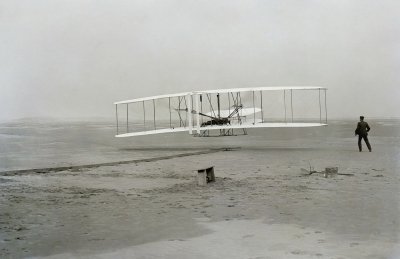 Thankfully, the Wright brothers were too busy building to read the papers.

In 1903 — nine weeks before the Wright Brothers made their first flight — the New York Times had an article about failed attempts to fly. It read, in part: “…it might be assumed that the flying machine which will really fly might be evolved by the combined and continuous efforts of mathematicians and mechanicians in from one million to ten million years — provided, of course, we can meanwhile eliminate such little drawbacks and embarrassments as the existing relation between weight and strength in inorganic materials.”

Wow. Glad the Wright brothers didn’t get the New York Times. Even the illustrious Lord Kelvin didn’t believe in airplanes (or X-rays, apparently, although he was right about transatlantic cables).

Even by 1910, the director of the Harvard College Observatory stated that airplanes would never reach the speeds possible with trains and automobiles. About that same time, Ferdinand Foch, the French general, thought that planes were of no military value.

The philosopher Wittgenstein, who died before Sputnik started the space race, used the concept of people going to the moon as an example of something absurd that we all know isn’t possible. In 1950, he wrote: “What we believe depends on what we learn. We all believe that it isn’t possible to get to the moon; but there might be people who believe that that is possible and that it sometimes happens. We say: these people do not know a lot that we know.”

Of course, during his lifetime, going to the moon was impossible and there are still people who think we haven’t been to the moon despite overwhelming evidence to the contrary. But many people were unconvinced that a moon landing was a reasonable goal for just a few scant years in the 1960s.

Every field has stories like this, it isn’t just flight. When Edison announced the lightbulb was going to be a reality, the British government set up a commission to look into it. Their conclusion? “Good enough for our transatlantic friends… but unworthy of the attention of practical or scientific men.” 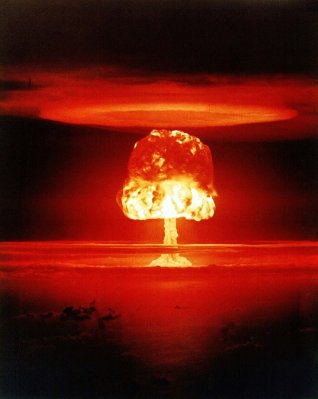 What if Germany had the bomb in WWII?

But perhaps the most important and fortunate bad statement from an expert happened during World War II. You’ve certainly heard the name Werner Heisenberg. A physicist of note, he headed up the German effort to harness the atom. Early in the war, there was consideration of building a nuclear bomb using uranium until Heisenberg calculated that a critical mass of U235 would be on the order of 10 tons.

Daunted by the production and transportation of that much uranium, the Germans turned to experimenting with heavy water and more or less ignored the kinds of bombs the Americans would successfully build using far less U235. The correct number for critical mass of U235 is just over 100 pounds and by using reflection, compression, and other techniques, a bomb really only takes around 20 or 30 pounds of U235 and even less plutonium 239 or uranium 233.

Historians have long debated what this means. Heisenberg was an excellent physicist, so it is hard to imagine he would make such a large mistake. But it isn’t clear if he made it deliberately or if it was just in error. Heisenberg and some colleagues were “guests” of the British when the news announced the bombing of Hiroshima. Hidden microphones picked up Heisenberg’s reaction: “Some dilettante in America who knows very little about it has bluffed them,” he said. “I don’t believe that t has anything to do with uranium.” He mentioned that it was impossible that the Allies had ten tons of pure U235. Unless he was performing for hidden microphones he suspected were there — which is certainly possible — it would seem he really did think it would take tons of material.

To Dream the Impossible Dream

So what projects have you decided were not possible? I know you do have to temper it a little. No matter how badly you want to invent perpetual motion or warp drives, they seem out of reach. Then again, so did the moon.

Vince Lombardi gets credit for saying “We would accomplish many more things if we did not think of them as impossible.” Good advice for all of us. Especially Doc.

[Banner Image: “One of the first airplanes built in Canada” by ArchivesOfOntario, Public Domain]