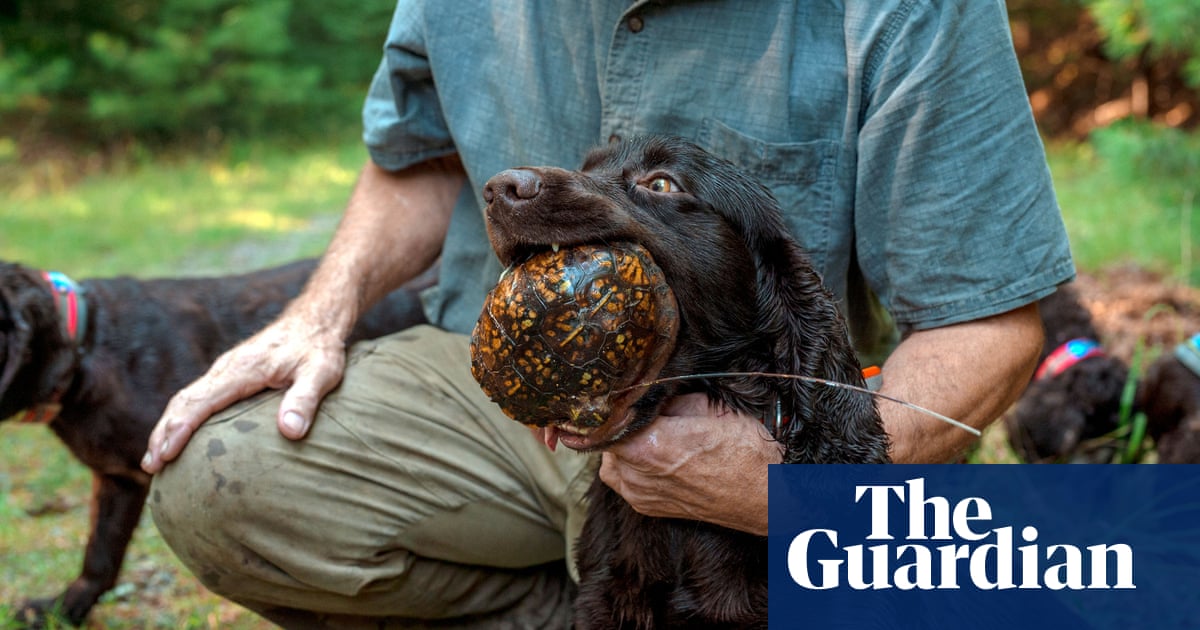 The six ‘superdogs’ who save turtles: ‘It’s all powered by love’

John Rucker and his dogs battle extreme weather, snakes and tough terrain to track turtles as their habitat is increasingly under threat

Margie remains completely still. Around her in the sun-dappled woods, six dogs catch her scent and begin to circle. She pulls her head and legs inside her shell and hinges it shut, tight as a trap, but the dogs are clearly professionals.

Ruger, a one and a half year old Boykin spaniel, prevails. He clamps his jaws around Margie’s shell and carries the 25-year-old eastern box turtle like a trophy to the feet of turtle tracker John Rucker.

“Good boy,” praises Rucker, as his six dogs – all Boykin spaniels – celebrate around him. “Where’d you find that big turtle?”

In Ruger’s mouth, Margie looks like a speckled sun, each of her 13 segments streaked with black and yellow designs like tiny ink blot tests, as if she is asking us what do you see? A box turtle – the unofficial mascot of introverts and slow-pokes, an indicator species on the decline.

Margie is entirely unharmed, though probably a little surprised and jostled. This is not her first human rodeo. Fitted with a transmitter epoxied to her shell, she’s among the turtles being tracked by citizen-scientist Meredith Brooks in the 1,000-acre Sherwood Forest neighborhood, located a few miles outside Brevard, North Carolina.

Brooks, who is known among neighbors as the “turtle godmother,” has been tracking turtles in the area since 2008 as a volunteer for the Box Turtle Connection, a statewide project aiming to collect a century’s worth of data about North Carolina’s official state reptile, as well as to identify threats and create a long-term conservation strategy.

Box turtles are slow-living, says Steve O’Neill, executive director of the Earthshine Nature Programs and Brooks’ area project lead. They’re slow to mature, slow to reproduce, and they have very low reproductive rates. They’re also long-lived animals, living up to 100 years old. O’Neill describes box turtles as “resilient, armor-plated creatures,” but says they’re “vulnerable to everything we do as humans.”

Box turtle habitat is increasingly fragmented by human development. Creatures of habit, a box turtle might discover that a long-traveled egg-laying route is now bisected by a highway. They’re hit by cars, killed by lawnmowers, fall into swimming pools, get attacked by dogs, or become victims of bulldozers. They’re also vulnerable to being sold into the pet market. And because they’re camouflaged and relatively secretive, they are hard to find, which makes studying their population and health inherently difficult.

Enter John Rucker, who is – as far as he knows – the only professional dog-aided turtle tracker in the United States. Rucker is tall and lanky, with a gray beard, and highly active at 73 years old. A former high school teacher, a revolutionary war buff, and a once-avid contradancer, he’s also a particularly adept storyteller.

The dogs are trained with praises, not treats. Photograph: Mike Belleme/The Guardian

The core of Rucker’s turtle-tracking operation is his relationship with his dogs, one built on trust and respect. He trains them with “praise from Dad” (referring to himself), and never with treats. “It’s all powered by love,” says Rucker. “If they’re hunting for treats, the dog will just quit after an hour or two of no luck. But when they’re hunting for love, they will hunt day after day.”

Over the years, Rucker says he’s also developed a “kinship” with turtles, those “bona fide dinosaurs” living in the confusion and chaos of the modern world. “I mean, I don’t know how to talk to Siri. I don’t know how to find places with GPS,” says Rucker. “I don’t really fit into this world. I see myself as a dinosaur as well.”

Rucker’s turtle-tracking career began entirely by accident in the late 1990s. After his father was diagnosed with Alzheimer’s, Rucker sold his house in Montana, quit his teaching job, and returned to North Carolina to take care of his father.

There, one of his dogs, a Boykin spaniel named Buster Brown, began retrieving turtles on his own. “I think maybe he could tell I was depressed because of my dad’s illness, and he brought me turtles, maybe thinking it would cheer me up,” says Rucker.

Turtle tracking became a hobby, but soon word of mouth spread in the scientific community. He began receiving phone calls from universities requesting his help. Now, more than twenty years later, Rucker spends much of the year in his off-grid cabin in Montana, working with his dogs and occasionally training new Boykin spaniel puppies.

In a YouTube video, Rucker documents the first year of a 2019 litter of Boykins. It’s December, the ground outside dotted with new snow, and Rucker reaches into the whelping box to pick up a newborn puppy. 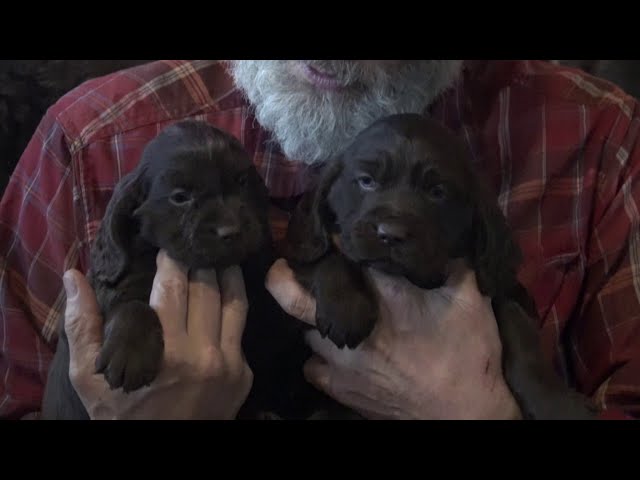 “The question is, is there a superdog or two in this litter of three?” he says to the camera. In another frame, the puppies are older, and John brings them outside for the first time. He begins training them with a fiberglass shell painted to look like a box turtle. Months later, the puppies bound through two-foot snowbanks. One of these puppies is Ruger, who has indeed proven himself to be a “superdog”.

In early spring, Rucker sets off with a team of dogs in an E-350 van, and spends the next four months hopping between turtle tracking jobs. His commercial clients are universities, herpetologists, and conservation groups interested in monitoring turtle populations and their health. His largest client is Dr Matt Allender, director of the University of Illinois Wildlife Epidemiology Laboratory, whose team follows Rucker across Illinois and Tennessee, searching for box turtles and studying their health, paying special attention to signs of ranavirus, a fatal and extremely contagious disease that can decimate a turtle population. To date, Allender’s is the largest ever box turtle health project in North America.

Naturalist Steve O’Neill, who has worked with Rucker for years tracking turtles in North Carolina, calls Ruckers’ service “priceless.” He says, “It just can’t be equaled. There’s no other way to collect this amount of data in such a short amount of time.”

But traveling with six working dogs is like “walking the razor’s edge”, says Rucker. He’s constantly worried that the van will break down or the A/C will go out. His van is outfitted with a kennel for each dog, multiple back-up air conditioner units, a generator, and two roof-top carriers. At night, Rucker and his dogs camp near the turtle tracking sites or sleep in Walmart parking lots.

“When I’m out in the fields or in the forest looking for turtles, it’s an alternative to the stressful artificial world that humans have created, where there’s telephone lines and cell towers and traffic signals and red lights,” says Rucker. “The dogs and I do not connect with that. We find it utterly foreign. The world we do connect with is nature and the world of turtles.”

Each turtle season is filled with particular challenges and surprises: tough terrain, bad weather, venomous snakes. Over the years, his dogs have had nine copperhead bites and one prairie rattlesnake bite, though all nonfatal.

The 2021 season began with Rucker and the dogs barreling down the highway in the E-350, outrunning a snowstorm that would have socked them in for weeks. At one site, he encountered such bad stinging nettle that he had to carry the dogs through it, one by one. And one evening in May, after a long day spent tracking turtles in Illinois, the passenger’s seat of the van spontaneously caught fire. The dogs watched from the grass as Rucker pummeled the flames with his backpack until the fire went out.

Despite the challenges, Rucker plans to continue the work until his body can’t any more. “I’m out to make the world aware of the plight of the turtles as their habitat is broken up and fragmented,” he says. “The more people know about box turtles, the more friends they have.”

At the end of July in western North Carolina, it’s a rare dry day in a string of rainy ones, and the woods are thick and emerald green. Here, where the dogs get to work, the bulldozers are imminent, the lot slated for a new-build house. To beat the heat, they begin the turtle hunt before 8am.

Rucker wades through fern carpets and dense thickets of doghobble and buckberry, past russula mushrooms with turtle-sized nibbles taken out of them. “Hey dogs, hey dogs, find turtle, find turtle,” he commands, as the dogs spread out around him.

By 10am, Rucker’s shirt is drenched in sweat and the dogs are tired. They lie at his feet, tongues lolling, wide grins. Each site is different, he says. Sometimes the conditions are exactly right. Last week, for example, at a site near Oak Ridge, Tennessee, the dogs found a turtle every three to four minutes.

But today, Margie is the only turtle found. Ruger’s tongue drapes across the dome of Margie’s shell. Brooks apologizes to her, extricating her from Ruger’s mouth, and promises to bring her a snail for her troubles.