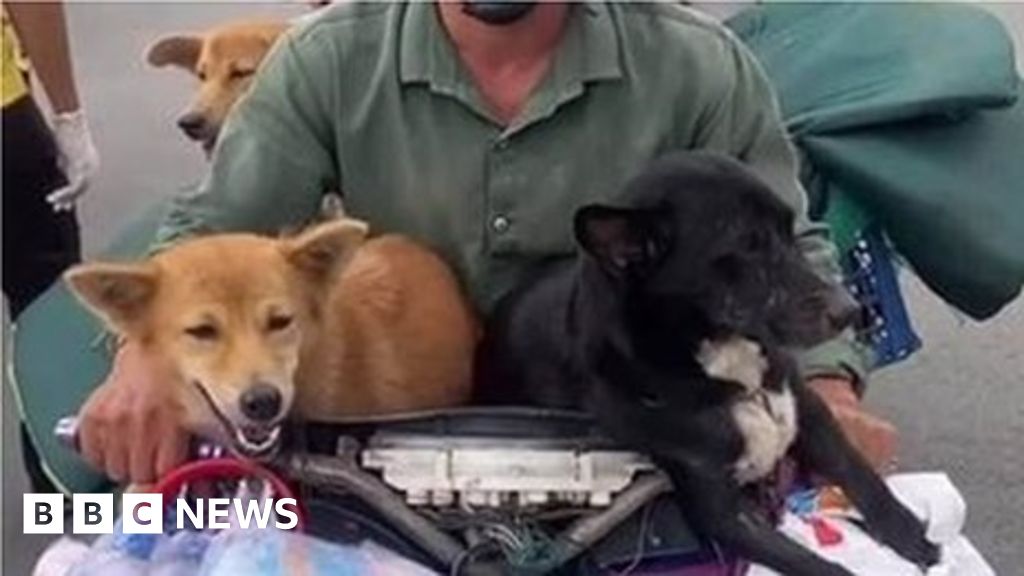 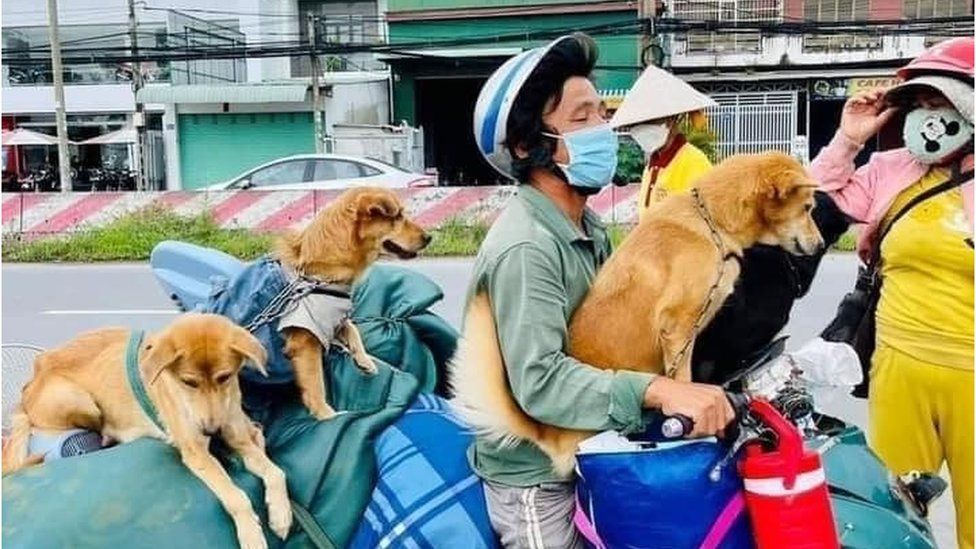 Image caption, Videos of the trip with dogs and belongings all piled on went viral on the TikTok social media app

As Covid infections spike, a Vietnamese couple left Long An province on a motorbike along with their pack of pet dogs.

They later tested positive for Covid-19. From their hospital beds, they found out 12 of their pets had been killed by authorities over fears the animals could spread the virus.

"My wife and I cried so much that we couldn't sleep," Pham Minh Hung, a 49-year-old bricklayer told the BBC.

"I didn't want to believe that really happened… I couldn't do anything to protect my kids," he said, referring to his dogs.

Their story, documented on social media app TikTok, has sparked huge backlash in Vietnam, and a petition calling for an end to the practice has gathered more than 150,000 signatures.

The latest wave of Covid-19 has been the worst to hit Vietnam since the start of the pandemic.

A harsh lockdown in recent months has meant many migrant workers have been unable to make a living, prompting at least a million to flee big cities.

Pham Minh Hung and Nguyen Thi Chi Em, 35, were among them.

On 8 October they embarked on an 280km (173 mile) journey along with their dogs and three relatives, who also brought three dogs and one cat.

The couple headed for Khanh Hung in Ca Mau province, the hometown of a relative, as Covid cases are not as high there. 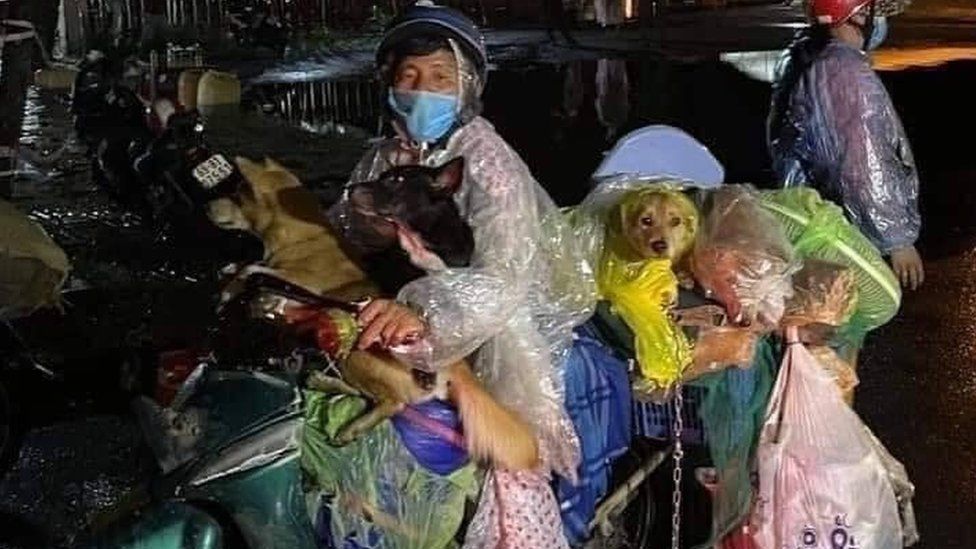 Image caption, Many online were touched by the couple's love for their dogs

Many witnesses posted videos about the couple's journey online, showing them on their motorbike with their dogs and belongings all piled on. The couple became popular with many social media users who cheered them on and wished them a safe journey.

Some said their hearts melted a little when the couple used raincoats to cover their dogs in the pouring rain. A few even delivered water and food to them.

The couple started out with 15 dogs, but as their trip went on, they gave two dogs to a volunteer after entering Ca Mau province, while another died. The rest continued on.

But the couple and their three relatives tested positive for Covid after reaching Khanh Hung. It is mandatory for anyone travelling across provinces to undergo testing. They were transferred to a hospital for treatment - the animals were left at a quarantine centre.

But local authorities killed their 12 dogs and their relatives' pets without informing them, state media said. The article was later removed.

It's unclear how the animals were killed. The official police newspaper carried an image indicating they were burned.

"Disease control must be prioritised in the first place and the decision to kill the animals immediately was a necessary preventive measure," local official Tran Tan Cong said during a press conference on Sunday.

There was swift reaction online with many calling the decision "cruel" and "heart-breaking".

Actress Hong Anh, a member of global animal welfare organisation Four Paws, called it "barbaric" and said she would send a petition to the organisation. 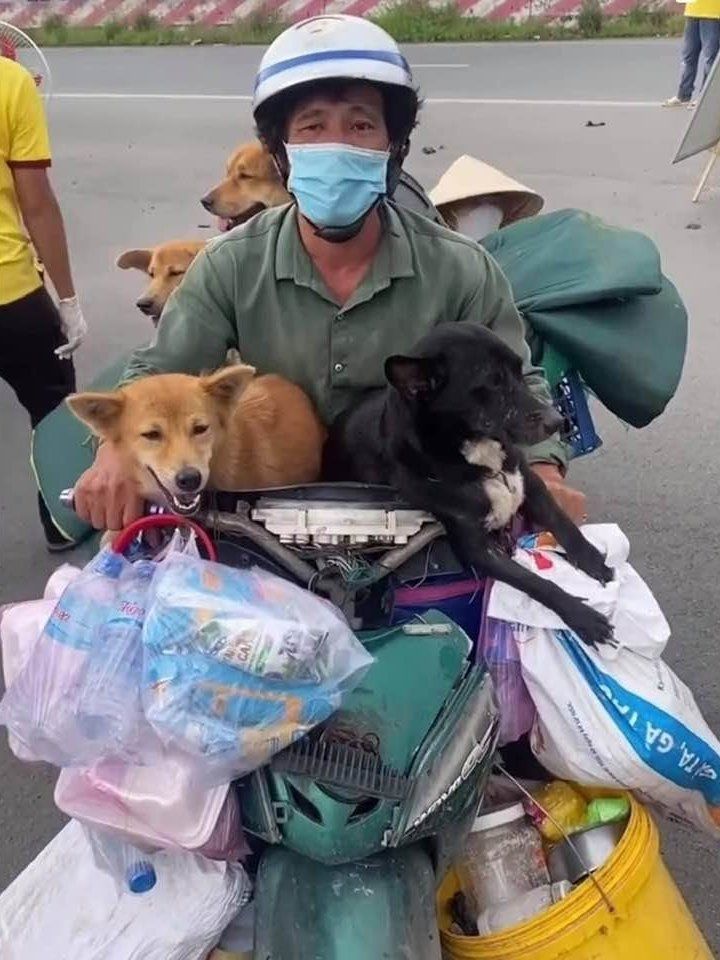 Image caption, The couple are still recovering in hospital

The killings were "unethical" and "ridiculous" because there are no guidelines dictating pets must be killed if owners are infected, said Nguyen Hong Vu, a staff scientist of the City of Hope National Medical Centre in the US.

"There is no scientific evidence dogs and cats can be an intermediary for the transmission of Covid to humans. However, people with Covid can sometimes infect them," Dr Nguyen said.

"There are multiple ways to make it right in this situation, such as quarantining them in a cage; contacting the owners' relatives or engaging a social organisation to take care of them until the owners recover," Dr Nguyen said.

Vietnam was lauded as a virus success at the start of the pandemic winning praise from the World Health Organization (WHO) with its quick response and widespread contact-tracing. But the Delta variant has brought the country to its knees.

It has reported 840,000 cases and more than 20,000 deaths in total. The majority of cases were detected during the latest wave.

Vietnam has been heavy-handed in its virus control effort - even though Prime Minister Pham Minh Chinh said last month there should be a plan to "live with the virus".

Many people have been charged and convicted for spreading the virus, with some jailed for five years.

Last month, a video showing several police officers breaking into a flat in the southern Binh Duong Province went viral. They dragged out a woman thought to have been exposed to Covid to do a test as her young son cried. It led to massive public backlash.

The authorities' decision to cull the pets was not surprising, observer Le Anh said.

"The Vietnamese government has been putting the highest priority on the fight against the coronavirus. There is this slogan 'Fighting this pandemic is like fighting the enemy'. It means the country is at war. You cannot expect rational and humane behaviour during a war."

The hardest thing for Mr Pham was that he found out his beloved animals had been killed from others.

He is determined to hold authorities accountable.

"I raised my kids for about six years, I definitely want justice for my kids," he said from the hospital.

Media caption, Vietnam put out this song to teach people how to protect themselves from coronavirus