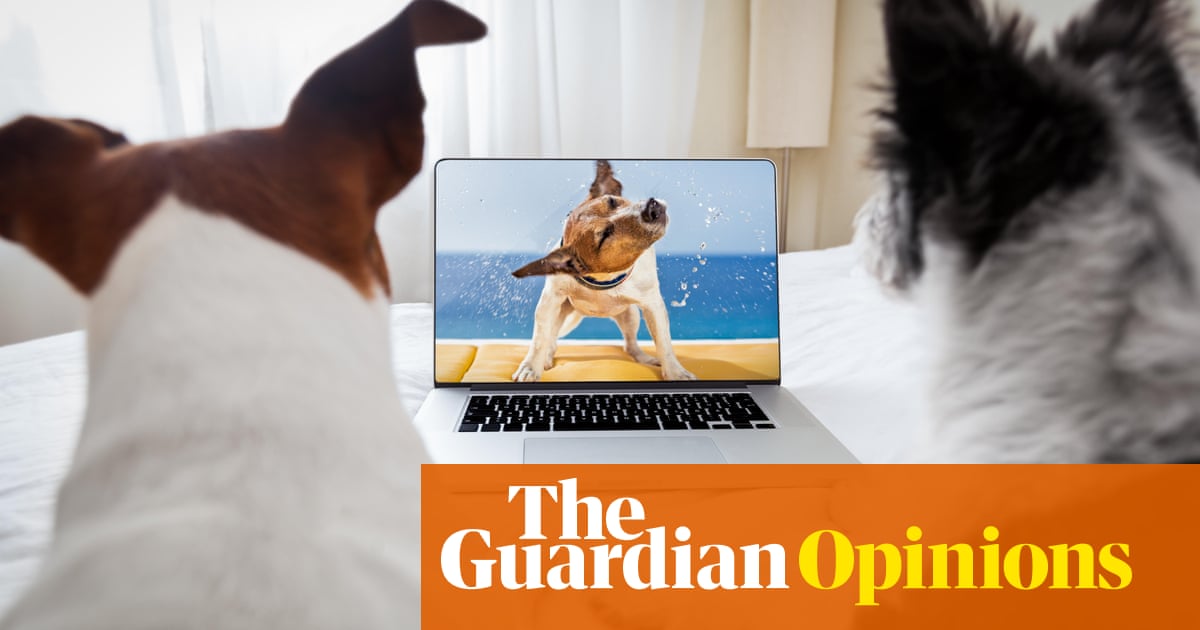 Show caption In my experience TV means absolutely nothing to a dog, but according to its developers TV for dogs is doing its work even when your dog appears to be ignoring it. Photograph: Javier Brosch/Alamy
Opinion

From ‘pawternity leave’ to Dog TV, and a now a DogPhone that allows your pet to call you, it’s all completely barking

When people ask me if I’m a dog lover I always say, “I’m a dog owner – it’s not the same thing.” It’s not that I don’t like my dog; I just don’t wish to be mistaken for some kind of enthusiast. I don’t want to see a photo of your dog. I’m not that interested in talking about dogs. And what I mean by that is: I don’t want to have a conversation about your dog.

I especially don’t want to talk about your dog as if it is a person – a person who offers you support in difficult times, or whose outlook on life serves as a shining example, or who possesses an uncanny emotional intuition. Like I said, I have a dog, so I know they’re actually pretty stupid. Mine is, anyway.

In the first year of the pandemic, more than 3 million new pets were acquired in the UK – many of them dogs. During that period the average price of a puppy doubled to a staggering £1,900, peak puppy if you will, which is an awful lot for an animal that hasn’t been trained to do laundry. Employees are increasingly able to demand “pawternity leave” from work to help their new pets settle in. As offices reopen, a flurry of new innovations have arrived to ease the loneliness of the at-home dog – or, more likely, the conscience of the at-work owner.

Earlier this month we saw the launch of Dog TV – a sort of canine educational network designed to keep your dog stimulated – or relaxed, or whatever – while you’re out all day. In my experience TV means absolutely nothing to a dog – even a cat will pay more attention to a screen – but according to its developers TV for dogs is doing its work even when your dog appears to be ignoring it.

Now comes the advent of the DogPhone – a device that allows your pooch to ring you at will, as if this was always a need waiting to be filled. I can’t really imagine what it would be like to have your phone go off in a meeting and then say: “Sorry, I need to take this; it’s from my dog.”

In order to provide a pet-friendly interface, the DogPhone is built into a soft ball that places a call when moved. Testing appears to show that even after several lessons, dogs mostly tend to ring their owners inadvertently, sometimes by sitting on the ball: a canine butt-dial. The researchers who developed the DogPhone claimed it was about “giving dogs a choice”, but most of ownership involves restricting a dog’s options: stay off the sofa, don’t eat shoes, even when I’m not here. We might differ about where those boundaries are set, but my first rule would be: don’t call me at work.

Predictably, as restrictions lifted in July, the Dogs Trust reported a huge increase in traffic – up 180% from February – to the “giving up your dog” section of its website. People are reportedly handing in their animals as “fake strays” in order to spare themselves the embarrassment of being failed or fairweather dog owners. Maybe the work of caring for the dog was too much, or maybe the emotional hole it filled turned out to be temporary.

It’s easy to think of people who ran out and bought dogs in the first throes of isolation as selfish, but there are probably no non-selfish reasons for getting a dog that didn’t need rescuing in the first place. I have my own selfish reasons for being a dog owner – it eats almost anything I spill on the floor, and as long as it’s in the room I am technically not talking to myself. But in exchange for its smelly, good-natured company I require very little of it in terms of emotional support or affirmation. Nor, to be honest, would I expect much.

As I said, I’m a dog owner, not a dog lover. As much as it’s worth reminding people that a dog isn’t just for Covid, I can’t help hoping that the fading of the pandemic will bring a stop all to the madness. At the moment, I can’t see an end to either.